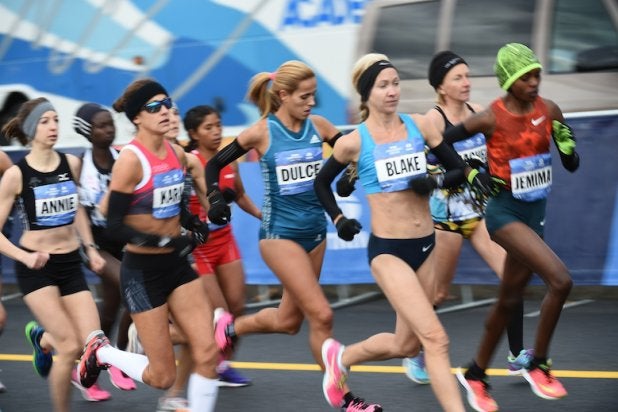 While several celebrities ran in the New York City marathon on Sunday, still more came out on social media in support of different runners. “Desperate Housewives” star Teri Hatcher was among those who competed in the race, finishing in 5:06:42, according to Runners World.

See photos: 9 NBA Stars Who Took a Shot at Hollywood

For the second year in a row, Kenyans took home the best time for both men and women. Wilson Kipsang’s winning time was 2:10:55, while Mary Keitany’s final time was 2:25:07.

While there were a few notable celebrities among the estimated 50,000 runners who competed in the event, there were even more who came out in support of it. Some called out friends and colleagues who were running, while others were sending out general words of support and admiration.

We’ve combed through and singled out some of the most inspirational, supportive and positive celebrity tweets from and about the 2014 TCS New York City Marathon we could find.

Is it normal to cry when someone finished marathon? So proud of you caro @CaroWozniacki #nycmarathon

Good luck to all our @DisneyABCTV friends and colleagues running the #nycmarathon!

Thinking of @suzannalexander this morning at the #nycmarathon! Good Luck!

Good luck and thank you to all of our #teamboomer runners today in the #nycmarathon. Get ready for a memory that will last a lifetime. — Boomer Esiason (@7BOOMERESIASON) November 2, 2014

Major shoutout to my girl @MsECLS & her fearless leader @AmberSabathia! Best of luck with the #nycmarathon! Go get em girls! #teampitcchin

Shout out to all the NYC cops who kept everybody safe during the marathon and the Halloween parade this weekend. ðŸš” @NYPDnews — Jeff Ross (@realjeffreyross) November 2, 2014

…. this medal is yours! @NYCMarathon http://t.co/3SpfoVf5eE

Here we are in action. @nbacares @NBA relay in the @nycmarathon. It was so much fun! Thank you to everyone involved pic.twitter.com/JLS6GPHlye

Look who found me at mile 18.. my Emerson and friend Jenn Ned! thanks for the support everyone! #nycmarathon pic.twitter.com/gVisol3Pt9