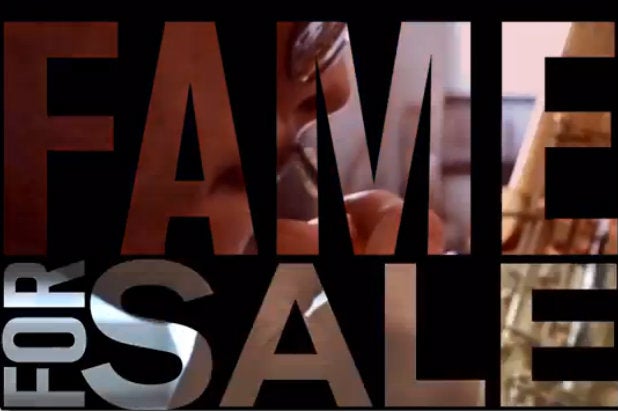 More and more these days, a celebrity’s or project’s stature is measured by the social-media imprint attached to it.

But how many of those Twitter followers and YouTube views are legitimate? In his new investigative piece “Fame: For Sale,” Frank Elaridi, a freelance reporter for ABC, explores the phenomenon of celebrities and artists buying Twitter followers and YouTube views in order to boost their profiles and, in some cases, use their inflated followings to leverage deals for themselves.

In his report (which is co-produced by David Beebe Projects), Elaridi speaks to one follower merchant who claims that he’s sold followers to a company representing Paris Hilton, “Real Housewives” star Yolanda Foster and a “Glee” cast member, among others.

TheWrap spoke with Elaridi to talk about his findings.

It’s funny, because I had a video that got a lot of views that I’ve since taken down. It was my reel, my hosting reel, and my friend was like, “Wow you’ve got a lot of views on that, did you buy views?” And I was like,”What do you mean, did I buy views?” I didn’t even know you could do that. So I started researching that to see how it works, and my roommate who’s an actor told me, ‘Yeah, you can buy Twitter followers too.” So that’s when I decided this is a story. It’s pretty much buying fame in a way.

How difficult was it to find outlets to buy views and followers from?

It’s so easy. It’s like online shopping for Cialis. Just like you would go online to look for shoes, and you put in a Google search or whatever search for shoes, and you get thousands of options. It’s the same thing with buying Twitter followers and YouTube views. You literally just type in “Buy Twitter followers” into Google, or, “Buy YouTube views.” And you’ll get so many options to choose from. It’s not a matter of finding one, it’s a matter of choosing one that you want to buy from. You get so many offers for different packages — you can get 5,000 of this or 10,000 of this.

Every one is different. I spoke to a young filmmaker, Ryan Turner, who used to buy YouTube views for his videos he was putting out. He said when he checked the graphs, it was always, like, the most-watched in Indonesia. All his YouTube views were coming from Indonesia.

As part of your report, you bought some Twitter followers for yourself. What is the benefit of buying fake followers, if they’re not actually following you?

It makes you look more famous than you are and, in that sense, other people start following you, and you actually start building a legitimate following. I had 13,000 followers before [I bought the Twitter followers], and then afterward I had about 20,000. With 13,000, that was pretty good. Still, with 20,000, when I follow somebody, they’ll immediately follow me back. Or a more famous person or noteworthy person will follow me back, because they’re like, “Oh, this person must have a following.”

How widespread do you think this phenomenon is?

I think it’s really wide, because when I was talking to managers and digital agencies off the record, all of them were telling me — literally, every single one, when I told them about the story — “Oh, I have clients who ask me to do that for them.” Like, “Oh, my clients always want this,” because it’s the cheap, fast, easy way, rather than having to go out and really do a lot of work.

Are there any downsides to building a Twitter following by buying it?

I spoke to someone who’s the CEO of a digital media company, and he [said], “I refuse to do it. Because yeah, it’s fast, you get quick results, but within months you’ll just start seeing them drop off, and in the end you really don’t have a legitimate following.” That’s not gonna get your products noticed, you’re not gonna get retweets — although you can buy retweets too.

What’s the benefit to buying followers, aside from having a bigger number attached to your account?

It helps you build an actual legitimate following. And in  YouTube’s case, having more views will bump up your video. So actually, when someone searches a key term in your video, it will be one of the first ones that pops up, because it has more views. And then, also, not only does it pop up, but I’m more willing to watch it, because I’m like, “Wow, this has a million views. It must be good, it must be something worth watching.” YouTube is helping you in a lot more ways, because first of all, it’s bumping it up, and second of all it’s compelling you to watch it even more.

Aside from delivering more exposure, there’s also a financial incentive.

Exactly — advertising. [And] I’ll tell you something that was told to me off the record. Somebody told me that they got $10,000 from a big-name beauty line to tweet for them, even though most of their followers were fake. And this person knew that that company was not going to get its money’s worth. And still, they didn’t turn down the money — they took it and they tweeted for this company. They took $10,000, because how do you turn down 10 grand? But if you can actually do that; you can collect money to tweet things for people, because they think, “Oh, you’ve got a lot of followers.”

Do you think it’s mostly the celebrities themselves that are directly involved in this, or is it their handlers and the companies they work for?

I think with bigger stars, it’s definitely their handlers, but I don’t know that their handlers aren’t telling them … But I’m sure with the lesser actors, maybe B-listers or reality stars, I’m pretty sure it’s them coming to companies. From what I’ve heard from a lot of these digital media companies, they tell me that their clients come to them and say, “I need more Twitter followers. Let’s buy some.”

The bigger actors, I don’t think they care — I think their PR people might do it. It’s just the same with paparazzi —  the lesser actors, the reality stars, they love it when they get shot by paparazzi. It’s keeping them in the papers. And then you have the Halle Berrys, the Leonardo DiCaprios, the George Clooneys saying, “We hate the paparazzi,” then they try to fight it with legislation. Because it bothers them and they don’t need it. The reality stars need it, it’s keeping them relevant. It’s the same thing with buying followers — they need it. That’s what they’re taking to the networks to get new deals.

Was there anything that particularly surprised you when you were researching your story?

You know what surprised me the most? The amount of people that do it. Because I talked to just one company — out of all the companies, I only spoke to one of them — and that one, which wasn’t even one of the biggest, said that he gets 100 to 200 orders a day. And he had three celebrities that he named: Yolanda Foster, Paris Hilton and a “Glee” star — he didn’t tell me which one, he can’t remember. So three celebrities, and 100 to 200 orders a day, and that’s just one of the companies. And there are several, several companies.