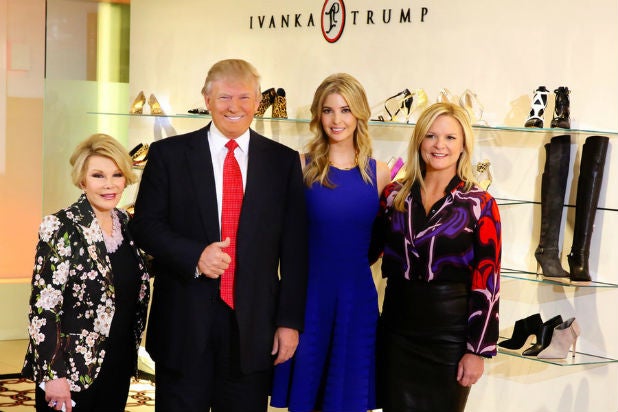 (Spoiler alert: Do not read on if you have not yet seen Monday’s episode, titled “I Wish I Had a Project Manager,” and don’t want to be spoiled.)

NBC’s “The Celebrity Apprentice” became an episode of nostalgia Monday as the late Joan Rivers served as a guest adviser in her last appearance on the show.

The show filmed months before Joan, 81, died from complications after a routine throat procedure, as TheWrap previously reported.

During the challenge, Joan made jokes about the high heels and boots on display.

“Do you have this in a six bunion?” she asked, pointing to a shoe.

In the board room, Kenya earned the win for Team Infinity for incorporating the shoe line into the overall theme. On the opposite team, Vivica and Trump both noted Olympic medalist Shawn Johnson’s hesitancy to step up as project manager. And Shawn was fired.

During the next challenge, Leeza and Lorenzo Lamas stepped up as project managers to create a viral video promoting coffee brand Chock full o’Nuts. Lamas’ team mixed classic and modern themes while Leeza’s team pit Brandi and Kenya against each other in a fake cat fight.

“I found it difficult with Brandi, because she always has this way of taking personal shots with me that are unnecessary,” Kenya told Trump. “I didn’t bring up LeAnn Rimes with her when I had my scene. I didn’t bring up the fact that her husband left her for a younger and prettier woman.”

In the end, Leeza’s Team Infinity won the challenge while Lorenzo couldn’t decide on who should join him for elimination. Lorenzo’s kindness didn’t pay off and Trump fired the actor with no hesitation.

During the episode viewers took to Twitter, even Trump, to admire Rivers’s final appearance:

How much do we love #JoanRivers?

Win or lose my real regret about #CelebApprentice is that funny, energetic, original & enormously talented Joan Rivers isn’t around to watch

Ah, Joan Rivers. She was one of the greats. People really need to go look up YouTube works of her classic work. Skip #CelebrityApprentice

Joan Rivers has been on my TV for .05 seconds and I am already tearing up

Looking forward to watching our friend Joan Rivers on tonight’s @ApprenticeNBC wish I was in the boardroom for this one.

Joan Rivers Remembered: A Life and Career in Pictures (Photos)

From “The Tonight Show” to “Fashion Police,” Rivers worked as a comedian, talk show host and general provocateur for over 50 years

Rivers made her first appearance on "The Tonight Show with Johnny Carson" on February 17, 1965. By 1983, she had become the permanent guest host.
View In Gallery