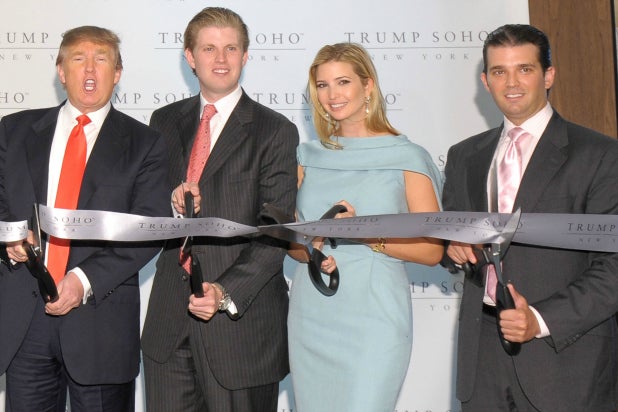 NBC has no plans to replace Donald Trump on “Celebrity Apprentice” with any of the real estate mogul’s children, a network insider told TheWrap Monday.

“I don’t believe we will continue with any of the Trumps,” the insider said.

Sons Donald Jr. and Eric were regular mentors and judges on the hit reality series, as was daughter Ivanka.

NBC officially severed its ties with the elder Trump earlier on Monday following controversial remarks he made last week about Mexican immigrants as a candidate for the Republican presidential nomination. As a result, Miss USA and Miss Universe — joint ventures between NBCUniversal and Donald Trump — will no longer air on NBC. Last week, Univision cut ties with the Trump pageants.

NBC will continue its relationship with Mark Burnett‘s company, however, which produces the business competition show.

Here is the full NBC statement on ending its partnership with Donald Trump:

At NBC, respect and dignity for all people are cornerstones of our values. Due to the recent derogatory statements by Donald Trump regarding immigrants, NBCUniversal is ending its business relationship with Mr. Trump.

To that end, the annual Miss USA and Miss Universe Pageants, which are part of a joint venture between NBC and Trump, will no longer air on NBC. In addition, as Mr. Trump has already indicated, he will not be participating in “The Apprentice” on NBC.

‘Celebrity Apprentice’ is licensed from Mark Burnett‘s United Artists Media Group and that relationship will continue.”

During his candidacy declaration speech, the businessman and reality TV star offended many, especially Mexicans.