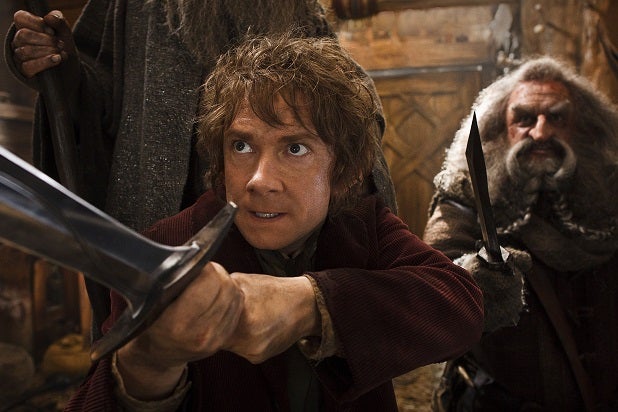 He had come to Weta Workshop to solicit the input of Peter Jackson on the new production and post-production tool. What he left with was his first client.

RealD TrueImage officially launches Thursday from the Consumer Electronics Show in Las Vegas, but in truth, its handiwork is already on display in “The Hobbit: The Desolation of Smaug,” where it can be seen Middle Earth’s snow-capped mountain peaks and cavernous dragon lairs.

“Peter was just blown away by it,” Lewis told TheWrap. “As soon as he asked if he could use it on ‘Smaug,’ we jumped …We were there toward the tail-end of production, but we kept getting commentary about how excited he was about the images he was seeing.”

Also read: How to Improve Hollywood in 2014: 9 Experts on the Future of Film and TV

RealD makes the bulk of its profits from installing 3D projectors and technology in movie theaters, but TrueImage can be used on either 3D or 2D films. During filming various artifacts or images often crop up on particular shots. TrueImage helps ameliorate the situation, by going frame by frame, pixel by pixel though a film. It recognizes what parts of an image were intended to be incorporated into the finished product and what elements were inadvertently introduced. The result is cleaner detail, better color and more vivid textures, RealD claims.

“It’s reconstructing the entire image to articulate what was actually captured versus what was introduced by the camera,” Jon Karafin, senior scientist and director of production technology at RealD, told TheWrap.

In a statement, Jackson explained that the technology helped make his images more pristine, which allowed the 3D to pop off the screen.

“By cleaning up noise we were suddenly free to really push the dynamic range and get extraordinary detail,” Jackson said. “The clean image makes for a much more comfortable 3D experience.”

Lewis said the company is currently meeting with filmmakers to discuss possible applications for the technology, and while he did not disclose what directors have signed on, he said he expects TrueImage will be used on films this year. The company also anticipates that the technology will be used in gaming and television, as well as across smartphones, tablets and other screens.

“We think this can improve the visual image across all devices,” Lewis said. “Theatrical for us is where you want to introduce new technology, because it’s at the top of the visual food chain, but we see this expanding into other areas.”