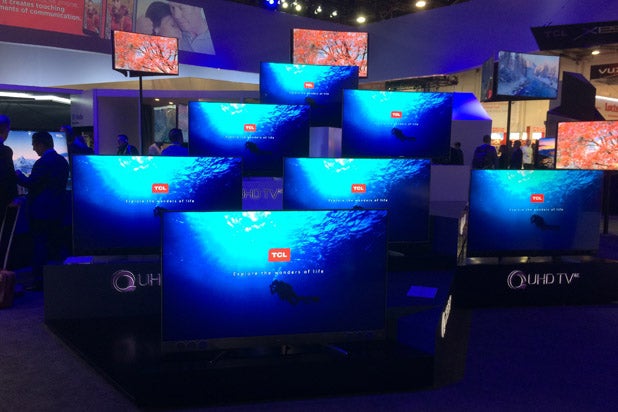 The annual Consumer Electronics Show in Las Vegas is the spot for the latest scoop on showers you can control from an iPhone and fridges that tell you if you have the right ingredients for a perfect risotto. But it’s also the place where TV manufacturers introduce their latest and greatest technology to the world, providing more than a glimpse into how we’re going to consume video content in the near future.

Here are five big takeaways from this year’s tech extravaganza:

1. There is basically no distinction between traditional TV and streaming, and TV manufacturers want it that way
In a bid to win over younger customers who have often opted out of expensive pay-TV packages, TV manufacturers are making it much easier for them to watch streaming content on the big screen. Brands from Samsung to LG to upstarts like Hisense and TCL rolled out new lines of smart TVs that incorporate streaming services directly into their main interface, allowing users to browse between streaming content and live TV all on one screen. These TVs allow people to flip between HGTV and Netflix with the ease of toggling between channels 4 and 5, in what is probably not a welcome development to those broadcasting on channels 4 and 5.

Also Read: CES 2017: Hollywood Loves VR More Than Ever, But Watch Out for Augmented Reality

And in the non-screen world, Dish Network’s Sling TV officially unveiled its AirTV Player at CES, an Android TV-powered device that combines over-the-air television (picked up through a HD antenna) with streaming services. Sling TV offers relatively limited “skinny bundles” with less than 50 channels for the most part, but placing the service on an interface with Netflix and broadcast channels makes it seem more robust — and makes cutting the cord seem like less of a sacrifice.

2. Quantum dot technology is the future of TV …
Liu Hong Xin, the president of Chinese conglomerate Hisense, told a crowd at CES that “manufacturers are approaching a technology intersection.” And it appears most of them are taking the quantum dot route.

Quantum dots are microscopic circles less than 50 atoms in diameter that emit different colors when they are hit by light depending on their size. There are two sizes of dots, larger ones, which glow red, and smaller ones, which glow green. The light-emitting diodes (or LEDs) that illuminate the dots are naturally blue, so between blue, red and green, the primary colors of white light, quantum dot TVs can render almost any color with pretty spectacular results. And several major brands have hitched their wagon to it as the future of flat screen TVs, including industry leaders Samsung and Sony, as well as Chinese upstarts Hisense and TCL.

3. … Unless OLED is
While most major manufacturers focused on quantum dots and short projection TVs, LG won one of the convention’s innovation awards with its latest flagship organic light-emitting diode (OLED) TV, which features an 0.2-inch thick “wallpaper” design that does away with clunky TV mounts. LG’s OLED technology was already known for its ridiculous picture quality, but OLED’s use of organic luminous material may present a disadvantage over time compared with inorganic quantum dots — or at least that’s what Samsung wants you to believe. Samsung and LG are two of the biggest fish in the smart TV pond, and their diverging technology strategies bear watching.

4. Virtual reality is becoming an obligatory part of tentpole movie marketing
Telecom equipment Qualcomm showed off its Snapdragon processor at CES by using it as the engine for a smartphone-based “Power Rangers” virtual reality experience, which was the main attraction at Qualcomm’s convention center booth. It was developed in partnership with Reel FX and Lionsgate, which is releasing “Power Rangers” on March 24. Fox rolled out “Planet of the Apes” VR and “Alien” augmented reality experiences, developed at its Fox Innovation Lab, and announced it would develop a VR experience for its “Alien: Covenant” movie with Ridley Scott as an executive producer. TheWrap did not talk to a single person at CES who expects a mega-budget blockbuster to be released anytime soon without some kind of VR tie-in.

5. The living room TV isn’t dead – it’s reinventing itself as the control center for the smart home
TheWrap attended a private demonstration of the graphics card firm NVIDIA’s new Shield set-top box where execs showed off its 4K streaming and gaming capabilities, but they saved its Google Assistant integration for the grand finale, using its voice-controlled remote to raise the thermostat, start a pot of coffee and find specific TV shows according to a set of parameters. And while standalone virtual assistants like the Amazon Echo and Google Home can control smart thermostats, locks and lights without using a screen, having 65 inches (or more) of Ultra HD real estate does enhance the experience and allow for visual feedback.

Lower-tier brands Seiki, Element and Westinghouse tried to stand out by incorporating Amazon’s Fire TV interface and its Alexa software, the technology behind the Echo. Samsung surprisingly hasn’t yet incorporated its SmartThings hub directly into its smart TVs, but with the NVIDIA Shield and a not-yet-released USB SmartThings dongle, there’s a not-too-difficult workaround.

And manufacturers from TCL to higher-end brands like Samsung and LG have dedicated efforts to making bigger and bigger screens look as unobtrusive as possible, whether they’re on or off. TCL unveiled its flagship X series, which has TVs as thin as 6.9 mm — and announced plans to develop a model just 3.9 mm thick. Samsung also introduced a “Lifestyle TV,” which displays a rendering of a piece of art instead of a black screen when it’s turned off. Hanging art on the wall when the show’s over? That’s truly a smart TV.