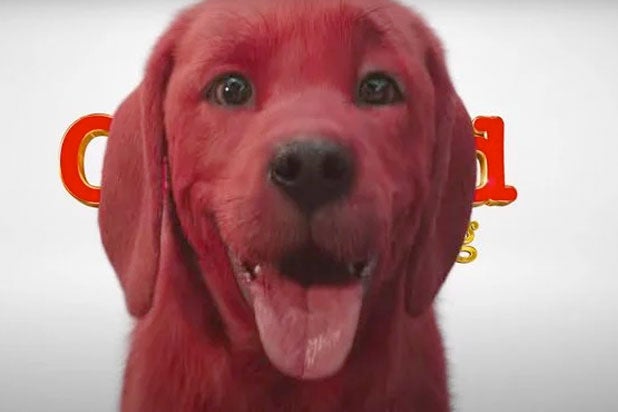 Did Hollywood learn nothing from the toothsome first version of Sonic the hedgehog?

After Paramount debuted a first look at the new CGI version of the children’s classic “Clifford the Big Red Dog” on Wednesday, fans took to the internet to express their displeasure at the title Labrador retriever’s “scary as hell” appearance.

Twitter user @Kathriller suggested that the new film might be a horror movie, posting an image of the character dwarfing much smaller canines: “Clifford is already drenched in the blood of his enemies and he isn’t finished.”

The movie, based on Norman Bridwell’s beloved children’s books and subsequent PBS TV series, follows Clifford and his human pal, Emily Elizabeth (played by Darby Camp), who adopts the little, red puppy from a magical animal rescuer (John Cleese) — and then wakes up to find a giant 10-foot-tall dog in her small New York City apartment.

Barring any “Sonic”-like intervention to retool Clifford’s appearance, the film is due in theaters sometime in 2021.

Here are more hilarious reactions below:

This isn’t Clifford, it’s a dog covered in blood. pic.twitter.com/tQvV6NwdBy

clifford is already drenched in the blood of his enemies and he isn't finished. pic.twitter.com/pb4TWe22KV

“Clifford looks weird”
“I don’t like it, why is it realistic”

Petition to make Clifford kaiju sized instead of this inaccurate JOKE.
Sign below. pic.twitter.com/MomI4iR5Ud

Why not just keep Clifford a cartoon!?? That dog looks scary as hell

whyyyy does the new clifford look like he hungers for my soul pic.twitter.com/yP8mV35SGL

The Paramount Pictures movie is based on the Scholastic Books canine character of the same name. In the kids’ books, which were originally written by Norman Bridwell and first published in 1963, Emily Elizabeth is a much younger girl and her mom and dad are together, and family pet Clifford is a giant, friendly Labrador retriever. This Clifford looks much more like a Golden retriever, just, you know, minus the golden.

“Clifford The Big Red Dog” does not yet have a release date, but it is expected in theaters sometime next year.