This review of “Cha Cha Real Smooth” was first published on January 22 after the film’s premiere at Sundance.

“We know each other,” says an assured Domino (Dakota Johnson) to Andrew (Cooper Raiff), the uninhibitedly goofy and kind-spirited 22-year-old who has recently come to brighten her life and that of her autistic daughter, Lola (Vanessa Burghardt), like a lighting bolt of possibility. Though they’ve seen each other only twice, their immediate chemistry and his earnest curiosity have fast-tracked their palpable attraction.

Coated in a warm effervesce, “Cha Cha Real Smooth,” Raiff’s follow-up to his 2020 SXSW winner “S—house,” is a disarmingly heartfelt gem with all the right moves to make you swoon. Though it may appear like the quintessential, character-driven Sundance title about upper-middle-class white people, there are nuanced undercurrents of depth that display how Raiff, a new prodigy of the dramedy, engages with predicaments beyond his age.

Freshly out of college, Andrew sleeps in the same room with his younger brother, David (Evan Assante, “Wild Indian”), and works a fast-food job (at a place ridiculously named Meat Sticks). But after enchanting all the Jewish mothers in town with his cheerful energy and dance-floor panache, Andrew gets hired as a party host for the slew of local bar mitzvahs. Domino becomes particularly fond of him, given his interest in encouraging Lola to take part in the fun. Soon the charming dude becomes her babysitter. For Domino, his presence in her home is a welcomed breath of invigorating air. 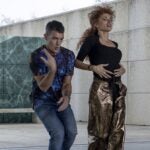 Indeed, this is a love story, but not in the obvious direction the first act may appear to be headed. More “Licorice Pizza” than “The Graduate,” Raiff’s new film bares the characters’ tortuous processes to pinpoint what they mean to each other. Domino is engaged to Joseph (Raúl Castillo), a lawyer who spends most of his time in Chicago and is vocal about her commitment to him. So even though there’s no misinterpretation about the mutual desire between her and Andrew, this manifests exclusively in tenderly flirtatious encounters.

In scenes where Andrew and Domino are alone, sitting at the counter eating a freeze pop or kissing with hesitation in the shadows, cinematographer Cristina Dunlap (“Am I OK?”) commits to tight close-ups that emphasize the romantic tension between them, trapping us in the narrow space that separates their lips, unsure but desperate to kiss. It’s also in those intimate moments that Raiff’s most poignant dialogue, for both characters, lands with honesty. In turn, Lola’s straightforwardness in saying exactly what she needs and how she feels about those around her provides an even-headed contrast to the grown-ups’ confused intensity.

Johnson, with a sparkle in her eye every time she speaks to her young suitor, conveys a similar sense of uncertainty as in her recent turn in “The Lost Daughter.” She often plays women who radiate an alluring magnetism that she transmits through her velvety voice and the demure grace of her body language. As Domino, the actress is a metaphorical heart surgeon, trying her best not to break the fragile one in Andrew. By the same token, Raiff never vilifies her for seeing Andrew behind Joseph’s back. 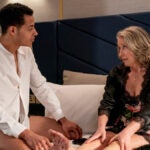 To explain why Andrew is such a well-adjusted sweetheart, Raiff refers to his mother, played by Leslie Mann, a professional at cool-mom parts. She suffers from bipolar disorder which, by virtue of having to be mindful of her condition, made him extra intuitive and sensitive to people struggling; this is by far the one story element that’s introduced a couple times in dialogue but is never fleshed out in substantial form. Still, like Raiff’s character in “S—house,” whose intense connection with his mother is at once a great source of support and a debilitating crutch to avoid facing adulthood, Andrew attributes his noble personality to the woman who raised him.

Wholesomely humorous, even when dealing with mature topics, “Cha Cha” points to Raiff’s evolution as a screenwriter and director. Though imperfect in how much time he spends on each, his approach to the supporting characters, even those standing directly in the way of what Andrew believes he wants, offers them a fair shake in their portrayals. Neither Joseph nor his mother’s square new husband (Brad Garrett) get stamped as villains. The young filmmaker doesn’t seem to apply the same writing savvy to the titles of his works, but they are, nonetheless, memorable if perplexing.

Banking on his meek charisma, Raiff has found characters that suit his individual range and thus excels at them. In the same way that Jim Cummings (“The Beta Test”) directs himself in roles of anxiety-ridden men on the edge of losing their cool, Raiff‘s guys are soft around the edges, not clueless in their interpersonal relationships but gentle and compassionate about other people’s psychic wounds. 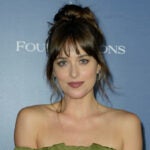 Also Read:
Dakota Johnson to Star in ‘Persuasion’ Based on Jane Austen’s Novel

What saves the filmmaker-star from being entirely too precious about his own character’s emotional underdevelopment and the way he loves at full throttle is the outburst of believable negativity peppered throughout. Andrew experiences intense jealousy when looking at photos of a girl he used to date, now spending time with another man in Barcelona, and when heartbreak clouds his judgment, he lashes out at David, who seeks wisdom for his own adolescent love life.

Pushing further into the darker spectrum of emotions may have upended the tone, but not having those emotions at all would put Andrew on too idealized a pedestal. Whether inadvertently or by design, Raiff serves as a proponent of a new archetype for heterosexual masculinity on screen, one that finds its sex appeal in open-heartedness, the genuine admission of shortcomings and an inherent vulnerability that shows crying not as a major breakthrough but as natural response to the complications of being a messy human being.

Given that “S—house” followed a college freshman terrified of being away from home, and now the focus is a recent graduate still adrift in the adult world, Raiff appears to be chronologically making movies about growing up, in a manner that echoes Richard Linklater’s “Boyhood.” If continued as a series, his movies about young-adult men deconstructing their complicated sentiments and figuring out life could potentially be called “Guyhood.”

Avoiding the sophomore slump, Raiff’s delightfully sigh-worthy “Cha Cha Real Smooth” is the type of sincere enterprise that could easily be spoiled with hackneyed platitudes or simplistically rose-colored plot points, yet here it sings with a wondrous candor and an unforced dramatic rhythm that turns it mightily irresistible.