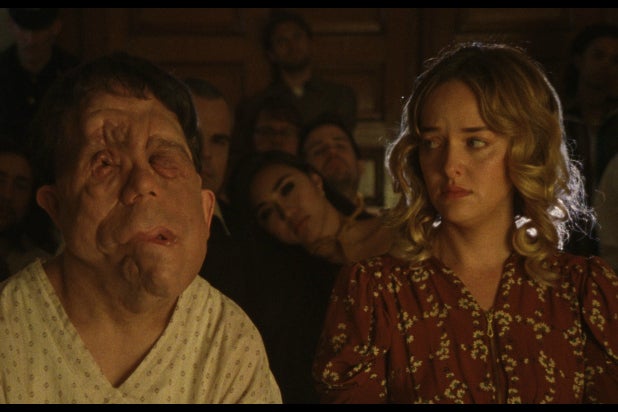 “Chained for Life” opens with a long quotation from Pauline Kael, the point of which is difficult to disagree with: actors and actresses tend to be more beautiful than the rest of us. Though the reason for this phenomenon is simple enough — people enjoy looking at pretty things, including and especially other people — its effects tend to be more complicated.

One case in point is writer-director Aaron Schimberg’s film, which makes good on its epigraph by exploring our conception of beauty (among many other things) with unexpected tenderness — unexpected because, at first glance, it looks like an ill-advised riff on “Freaks” that could easily turn exploitative.

Alongside Jess Weixler (“It Chapter Two”), who’s one of countless thespians to demonstrate Kael’s point, the film stars Adam Pearson, a performer familiar both for his scene-stealing turn in “Under the Skin” and for a condition called neurofibromatosis, which covers his face in tumors. Both play actors in a low-budget genre flick about a German cosmetic surgeon performing highly questionable procedures, which is where things get weird: From the very first scene, Schimberg keeps us guessing whether a scene is part of the “real” movie or the meta-narrative for as long as possible, often to jarring effect.

That isn’t the only line being blurred. Mabel (Weixler) and Rosenthal (Pearson) develop an offscreen friendship that may or may not be based on deeper feelings, but her true intentions are left ambiguous even as a love scene is added to the script. (Rosenthal isn’t the only unusual member of the ensemble, which also includes conjoined twins and a giant, but he shares the most scenes with the leading lady.)

The film-within-a-film has the feel of a future cult classic, what with its exaggerated German accents and schlocky subject matter, and though “Chained for Life” is a curio in its own right, it’s also too heady for the midnight-movie treatment. It takes its name from a 1952 exploitation film about conjoined twins Daisy and Violet Hilton, who played themselves and also appeared in “Freaks.” Deeply weird without being difficult to follow, “Chained” also bears traces of David Lynch’s “The Elephant Man” in its DNA — influences that guide Schimberg in a direction that’s difficult to predict but fun to follow.

Set almost entirely in the abandoned hospital where that unnamed movie is being filmed, it’s buzzing with background chatter among below-the-line workers providing as much off-the-wall levity as the actual narrative. “It’s not altogether logical,” the unnamed director says of his script in a Herzog-inflected voice, “but it’s got a kind of poetic truth — a rhapsodic truth.” Suffice to say that nothing we see of his work comes close to the level of “Fitzcarraldo.”

There’s occasional cognitive dissonance in how much time “Chained for Life” spends skewering art films and the people who make them, given that it’s very much one itself (it was even shot on grainy celluloid) but it has the good sense never to be self-serious. It’s instead a kind of surreal romp, as funny as it is uncomfortable.

Watch Video: Disney+'s 'High School Musical: The Musical: The Series' Trailer Is Even More Meta Than Its Title

It’s also a treat to look at, which is similarly befitting of Kael’s words. Cinematographer Adam J. Minnick (a frequent collaborator of “Relaxer” filmmaker Joel Potrykus) has an affinity for playful tableaux and busy shots of the cast and crew in which everyone’s doing something, and it’s up to us to focus on what matters. The grainy patina makes it easy to imagine the world created by Herr Director, which is crucial — with a slicker look, the illusion might have fallen apart.

Even once you’ve gotten used to Schimberg’s trick of making you question whether what you’re seeing is “real,” he’ll let a scene play out longer than ever before to keep you off balance. An inversion of that ruse creates a genuinely surprising third-act twist that spirals the film even further into surrealism, and by the time it’s appeared to resolve itself, the credits have begun rolling and you’re left reevaluating everything you’ve just seen.

Beauty is in the eye of the beholder, and “Chained for Life” will have you rubbing your eyes to make sense of what you’ve just seen.