Eilish is the cover star of the new issue of British Vogue, released Sunday. 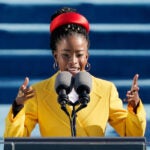 The 2020 Met Gala was canceled and the 2021 iteration was postponed.

A year ago, Vogue’s YouTube page streamed several shows about famous models and stars who have walked the red carpet at the Met over the years, including Liza Koshy, Naomi Campbell and Cardi B. Wintour herself also hosted a special retrospective called “A Moment at the Met,” looking back at the famed event.

“It would be impossible to recreate the gala on Monday evening, though I have loved hearing how so many are marking the occasion in their own ways,” Wintour said in a statement last year. “So instead, I asked a few friends to join me for a simple moment-one that I hope will bring us all a bit of joy.”

The new, postponed Met Gala is also supposed to bring a bit of joy. Vogue’s release of the theme and co-chairs Monday noted, “For a gala that’s known for its timely dress codes, ‘American Independence’ feels particularly meaningful. After an isolating and challenging year, we are celebrating a newfound sense of freedom: to gather, to travel, and to get utterly dressed to the nines — or better yet, into the double digits.”

Chalamet, the Oscar-nominated star of films like “Call Me by Your Name” and the upcoming “Dune,” was a little more understated with his version of the announcement. On Instagram, he posted a photo of the infamous venue, New York City’s Metropolitan Museum of Art, then a selection of pictures of himself, Eilish and poet Gorman and athlete Osaka.