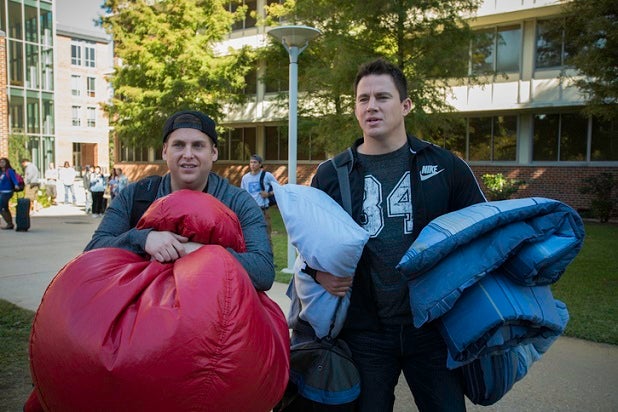 Channing Tatum and Jonah Hill‘s “22 Jump Street” got off to a flying start in its box-office battle with “How To Train Your Dragon 2,” taking in $5.5 million from Thursday night screenings. The shows started at 7 p.m. and were at a healthy 2,746 locations.

“Dragon 2” took in $2 million from its Thursday night showings, which began at 8 p.m. That’s a strong number, since families likely didn’t stay up for later shows.

The well-reviewed sequels are expected to power a big weekend, with both projected to top $55 million by analysts, and knock Fox’s tragic teen romance “The Fault in Our Stars” out of the top spot.

The Thursday haul for “22 Jump Street,” from Sony and MGM, more than doubles the $2.3 million that Universal’s similarly R-rated “Neighbors” launched with on its way to a $49 million opening early last month. The first film, “21 Jump Street,” brought in $700,000 from midnight shows, but that was at just 600 theaters.

DreamWorks Animation’s PG-rated “Dragon 2” is seen as having the inside track this weekend in part because distributor Fox has it in a saturation-level 4,253 theaters, while “Jump Street 2” is in 3,306. It’s also the summer’s first major animated movie, so family audiences are primed.

Both movies are building on well-liked originals that were box-office hits.

Also read: ‘How to Train Your Dragon 2’ Review: Something Gets Lost in the Leap from Romp to Epic

The original “How to Train Your Dragon” debuted to $43.7 million in March of 2010 and went on to bring in $217 million domestically and nearly $495 million worldwide.

Bonnie Arnold is the producer of “Dragon 2,” which was made for a reported $145 million. DreamWorks Animation is banking on a rebound, after recent misfires “Mr. Peabody & Sherman” and last year’s “Turbo,” both of which resulted in writedowns for the studio.