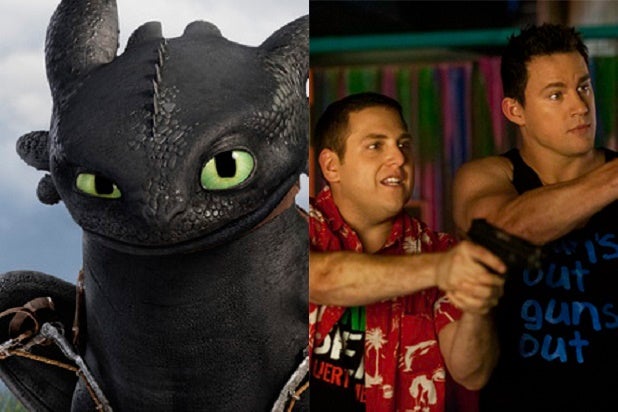 Give “How to Train Your Dragon 2” a slight edge over “22 Jump Street” in what’s shaping up as one of summer’s most hotly contested and busiest weekends at the box office.

The DreamWorks Animation sequel, distributed by Fox, and the buddy cop comedy follow-up starring Channing Tatum and Jonah Hill from Sony and MGM are both projected to top $55 million by analysts. The typically more conservative studios’ projections are more than $5 million under that, but it looks like both films will do enough business to knock reigning champ “The Fault in Our Stars” out of the top spot on Father’s Day weekend.

The critics love both “22 Jump Street” and “Dragon 2,” and they’re both over 90 percent positive on review aggregation site Rotten Tomatoes. Tracking, social media and online ticket sales indicate they’re connecting with their target audiences, but the 3-D “Dragon 2” is seen as having more potential to go higher for several reasons.

It will be the summer’s first major animated release, and there appears to be significant pent-up demand among the family crowd for the PG-rated update on the young Viking Hiccup and his pals.

Another is that the Dean DeBlois-directed “Dragon 2” will be in a market-high 4,235 theaters — among the widest releases ever for an animated movie — while “22 Jump Street” will be in roughly 3,300.
The comedy sequel directed by “The Lego Movie” team Phil Lord and Chris Miller is R-rated, and that will limit its audience to a degree.

Sony marketers have done a good job of getting across “22 Jump Street’s” simple premise — Schmidt (Hill) and Jenko (Channing) go undercover in college this time.  On Wednesday, sales for the film were pacing ahead of those for “Ted” and “Neighbors” at a similar pre-release point at online ticket broker Fandango. And it is far ahead of where “Neighbors” was on both Twitter and Facebook at a similar stage.

Both movies are building on goodwill engendered by popular originals.

The original “How to Train Your Dragon” debuted to $43.7 million in March of 2010 and went on to bring in $217 million domestically and nearly $495 million worldwide.

Bonnie Arnold is the producer of “Dragon 2,” which was made for a reported $145 million. DreamWorks Animation is banking on a rebound, after recent misfires “Mr. Peabody & Sherman” and last year’s “Turbo,” both of which resulted in writedowns for the studio.

“Dragon 2” is currently outselling “Rio 2,” “The Croods” and “Hotel Transylvania” on Fandango at the same point in the sales cycle. It’s very strong on social media, not far behind where “Despicable Me 2” was on Facebook, though trailing “The Lego Movie” on Twitter, according to BoxOffice.com.

“22 Jump Street” will be getting the jump on Thursday night, with shows beginning at 7 p.m., while “Dragon 2” will start its early screenings at 8 p.m.

There’s a good chance late-night crowds on Thursday and Friday will get the raunchy comedy off to a fast start and it could lead going into Saturday. But it’s a good bet the minivan crowd will help “Dragon 2” dominate on Saturday and Sunday.

There’s intrigue beyond the two openers.

Will “Fault” be able to find a mainstream audience after its fangirl-fueled $48 million debut last weekend?

How big a second week tumble will Tom Cruise’s “Edge of Tomorrow” take after its underwhelming domestic opening?

Will audiences get a side ache? With “22 Jump Street” hitting the market and “A Million Ways to Die in the West,” “Blended,” “Neighbors” and “Chef” already there, five comedies could make the top 10.