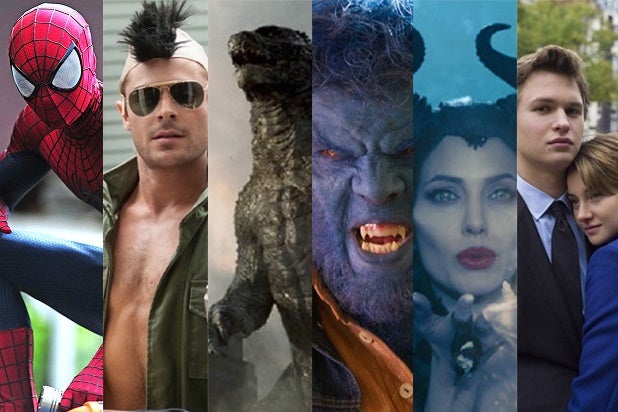 Congrats on being No. 1 at the box office, we love you. Now get out of here.

That’s the message moviegoers have been sending this summer, which has seen a different movie take the top spot in each of the last six weekends. There hasn’t been a repeat winner at the box office since “Captain America” pulled off a three-peat back in April.

Several of the No. 1 movies have exceeded expectations and will be major financial winners, particularly with overseas grosses factored in, but none have become dominating box-office behemoths at home. The leaders’ second-week drop-offs haven’t been precipitous and they’ve played solidly in subsequent weeks; it’s just that the new movies have seized the spotlight — and grosses.

So far this summer, Sony’s “The Amazing Spider-Man 2,” Universal’s “Neighbors,” Warner Bros.’ “Godzilla,” Fox’s “X-Men: Days of Future Past” and Disney’s “Maleficent” have all captured the flag — and given it up in their second weeks.

The trend is likely to continue this weekend, when either “22 Jump Street” or “How to Train Your Dragon 2” is expected to displace last weekend’s leader, the Shailene Woodley teen romance “The Fault in Our Stars,” as the No. 1 movie.

Also read: Can ‘Fault in Our Stars’ Clean Up After Box-Office Flash Mob?

This year, five different studios have had winning weeks. There’s something to be said for spreading the box office wealth around. A couple of years ago, “Marvel’s The Avengers” went on such a tear that it crimped the business of its challengers.

But there’s hasn’t been quite as much wealth to spread this year. At this point, the summer box office is running roughly 10 percent behind 2013, which was the biggest in history. The overall year remains 2.5 percent ahead of last year.

The apparent fickleness on the part of audiences can also be seen as an indicator that the studios are picking their release dates wisely — achieving at least one weekend in the sun for their tentpole movies in an intensely competitive summer corridor.

“It shows that the studios’ strategies are working, both in terms of picking dates and marketing,” Rentrak senior movie analyst Paul Dergarabedian told TheWrap. “If you can get audiences excited about the latest release every week, it’s pretty impressive.”

“The variety in the marketplace, where we’ve had two movies that target mainly women (‘Maleficent’ and ‘The Fault in Our Stars’) winning the past two weeks, is a good thing, too,” Dergarabedian said. The mix has been good, albeit a little light on family fare, with two superhero sagas (“X-Men” and Spidey), a classic monster movie update (“Godzilla”) and the R-rated comedy frat romp “Neighbors” all taking a turn on top.

The trend could change soon. This weekend’s winner, likely “22 Jump Street” or “Dragon 2,” will go up against “Think Like a Man Too” and “Jersey Boys” in two weeks and could well repeat. And Paramount’s “Transformers: Age of Extinction” (June 27) and Fox’s “Dawn of the Planet of the Apes” (July 11) appear to have the potential to hold the market for a couple of weeks as well.

Next summer could be an entirely different story. “Avengers: Age of Ultron” will kick things off, and “Jurassic World,” “Mad Max: Fury Road,” “The Fantastic Four” and a new “Terminator” movie are among the would-be blockbusters that will have the potential for staying power.