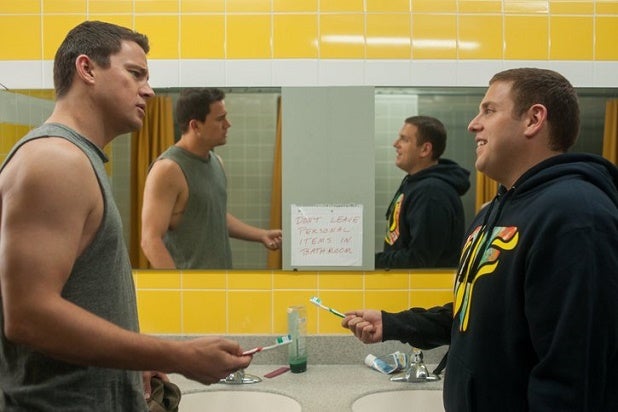 Channing Tatum and Jonah Hill‘s “22 Jump Street” took the first round in its battle for the weekend box office crown with “How to Train Your Dragon 2,” rolling up an impressive $25 million Friday.

It may have scored a knockout. The comedy sequel from Sony and MGM is on pace for an opening weekend north of $60 million. That looks like it will be enough to hold off “How to Train Your Dragon 2,” which brought in $18.5 million on Friday, and it will be plenty to displace last weekend’s top movie, “The Fault in Our Stars.”

The Fox-distributed DreamWorks Animation family film will get a big bump Saturday and Sunday when the minivan crowd turns out on Father Day weekend, but appears likely to wind up in the $53 million range for the weekend.

The strong showing by the R-rated buddy comedy, directed by Chris Miller and Phil Lord of “The Lego Movie,” is all the more impressive since it was in significantly fewer theaters than “Dragon 2.” “22 Jump Street” averaged about $7,562 in its 3,306 theaters, while “Dragon” took in roughly $4,300 from each of its 4,253 locations, among the largest rollouts ever for an animated film. Family crowds could flip those figures over the weekend, however.

The “21 Jump Street” sequel was clearly a date-night movie, playing to an audience that was evenly split along gender lines. Fifty-six percent of the crowd was under 25 years of age.

The well-reviewed sequels both scored with first-night audiences, who gave “22 Jump Street” an “A-” CinemaScore and “Dragon 2” an “A.”

And if “Dragon” maintains its current course, it will be just the fourth time ever that two films have topped $50 million in the same weekend — and all have come in June. “Monsters University” and “World War Z” did it last year, “Prometheus” and “Madagascar 3: Europe’s Most Wanted” managed the feat in 2012 and “WALL-E” and “Wanted” pulled it off in 2008.

Disney’s “Maleficent” is on course for a $20 million third week and third place after bringing in $5.8 million Friday. That’s just a 43 percent drop from last week and means that Angelina Jolie‘s live-action update of the Sleeping Beauty saga will be up to $165 million domestically by Sunday and more than $350 million globally.

Tom Cruise’s “Edge of Tomorrow” was battling “Fault in Our Stars” for fourth.

The sci-fi action saga from Warner Bros. Took in $4.5 million Friday (down 58 percent from last week) and is looking at a second week in the $15 million range. That would put its domestic total for Warner Bros.’ at  a soft $56 million, but the $178 million co-production with Village Roadshow has played more strongly overseas, where it’s brought in more than $111 million.

Fox’s Shailene Woodley-Ansel Elgort young-adult tearjerker also will wind up at around $15 million in its second week, after taking in $6.3 million Friday, a 76 percent tumble from its spectacular $26 million first day last week. On that pace, the $12 million Fox 2000 adaptation of John Green’s bestseller will finish the weekend with a two-week domestic total of more than $80 million.

“X-Men: Days of Future Past” is about to become the year’s third film to cross $200 million domestically, after a $2.6 million Friday put it on pace for a $9 million fourth weekend. “The Lego Movie” and “Captain America: The Winter Soldier,” both with roughly $256 million, did it earlier. Fox’s Marvel mutant mashup has taken in more than $624 million globally.

“Godzilla,” “A Million Ways to Die in the West,” “Neighbors” and “Chef” rounded out the top ten, and should all finish in the $2 million-$3 million range for the three days.