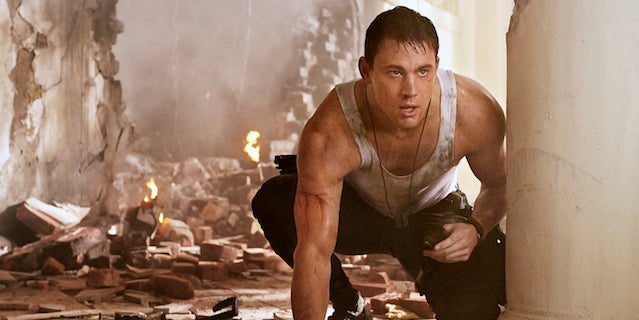 Channing Tatum has been enjoying a stellar rise to movie stardom over the last few years, and even if "White House Down" isn't the explosive hit he's hoping for, his career is showing no signs of flaming out any time toon.

While "White House," Roland Emmerich's $150 million exercise in the art of CGI destruction, is only on track to rake in around $30 million at the domestic box office this weekend, Tatum has at least three other potential moneymakers in some level of production.

The biggest of the three, at least in size and scope, is "Jupiter Ascending," the next sci-fi spectacular from "Matrix" directors Lana and Andy Wachowski. Tatum stars opposite Mila Kunis in Warner Bros.' summer 2014 release, which follows a destitute woman (Kunis) targeted for assassination by the Queen of the Universe because her very existence threatens to end the Queen's reign over the cosmos. Tatum will expand his action star power as a genetically engineered ex-military hunter who arrives on Earth to track Kunis down.

Although Tatum's showbiz success has been steadily increasing since he made young women swoon as a troubled breakdancing janitor in 2006's "Step Up," the 33 year old proved his comedic chops in last year's breakout comedy hit, "21 Jump Street," which he also executive produced.

Also read: Jimmy Kimmel Wants to Channing All Over Your Tatum – Whatever That Means

Following a hilarious cameo in Seth Rogen and Evan Goldberg's "This Is the End," Tatum hopes comedy fans will once again flock to see him go undercover alongside Jonah Hill in "22 Jump Street" — another project that should assure Tatum has a strong summer showing next year.

And just as Tatum proved his worth as a funny person, "Foxcatcher" — a wrestling drama based on a tragic true story — should elevate his thespian status in the eyes of the most serious filmmakers.

Most recently, Tatum has set his ambitions toward making it on the small screen, too. He is attached to executive produce a television pilot written by actor Nick Zano. Still untitled, the project is in very early stages of development at Warner Bros. Television. The half-hour, multi-camera comedy is based on Zano's own experience being raised in a multi-generational house of seven women in New Jersey.

Still want more Tatum? Cross your fingers 20th Century Fox can close a deal with him to appear alongside Joseph Gordon-Levitt in the theatrical adaptation of classic musical, "Guys and Dolls."

So with a bevy of projects on the heels of release, entering production, or graduating from development, the "Magic Mike" star's future appears to be brighter than a strobe light flashing in a Florida strip club.