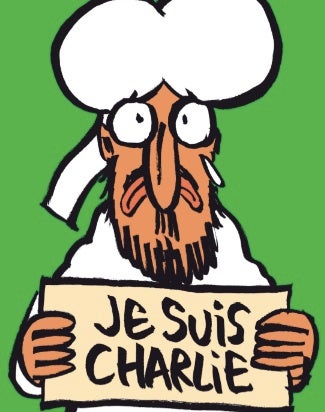 A week after 12 people were killed at its office, satirical magazine Charlie Hebdo released an eight-page edition in 16 different languages with a cover featuring the Prophet Muhammad — the image the magazine was targeted at for publishing—with a single tear saying, “All is Forgiven.”

Five million copies are expected to be sold.

Some of the biggest media platforms in the world chose not to show the cover in its coverage.

The New York Times’ story links to French daily Libération Société, describing the cover but not showing it.

“The cover shows the bearded prophet shedding a tear and holding up a sign saying, “I am Charlie,” the rallying cry that has become synonymous with support of the newspaper and free expression. Above the cartoon on a green background is the headline “All is forgiven,” the Times’ story reads.

“We have a standard that is pretty simple,” executive editor Dean Baquet told Politico. “We don’t run things that are designed to gratuitously offend.”

“We aren’t republishing the Charlie Hebdo cartoons because we are afraid,” Flemming Rose, former cultural editor or the paper, said. “But I know well that if you give in to intimidation, it works.”

Canadian Broadcasting Corporation didn’t show the image, instead showing an image of a person holding the cover with his or her hands wrapped over it, blocking the image. The BBC  showed a cutoff image of the cover in its web story. Its reporter showed inside pages of the magazine but not the cover.

The Los Angeles Times showed an image of a man holding the cover, with his hand covering the image of the Prophet Muhammad.

On cable news, CNN and MSNBC didn’t show it — Fox News is showing the image.

“We don’t go out of our way to offend any religious groups, including Muslims,” Brian Stelter said on CNN Newsroom Wednesday from Paris regarding CNN’s decision not to show the cover.

On broadcast news, NBC News and ABC News opted against showing the cover — CBS News has shown the cover.

Many outlets did show the cover:

The Washington Post showed the image, with executive editor Martin Baron deciding the image was appropriate for readers to see: “Baron said last week that the paper’s policy was to avoid publication of material that is “deliberately” offensive to religious groups but said Monday that the new Charlie Hebdo cartoon did not meet that criterion,” Paul Farhi writes.

USA Today broke with its usual policy of not publishing the Prophet Muhammad: “In this case, we decided the news worthiness of the first cover of Charlie Hebdo since the awful events of last week made it essential to do it,” Editor at Large Rem Rieder said in a video.