A shocking new cartoon showing Queen Elizabeth II pressing her knee into the neck of Meghan Markle harkening back to the killing of George Floyd at the hands of police is rousing cries of racism.

The cover of French satirical paper Charlie Hebdo’s attempt at parody by joking about the murder of a Black man by a white law enforcement officer while also referencing the split of the royal family from the Duke and Duchess of Sussex is no laughing matter for many who are demanding the issue be pulled.

The headline on the caricature translated from French reads, “Why Meghan left Buckingham Palace,” with a bubble cloud over Meghan, saying, “Because I couldn’t breathe anymore.”

Markle and her husband Prince Harry sat for a blockbuster interview with Oprah Winfrey that aired last weekend and hasn’t stopped generating headlines since. At one point, in a clip run exclusively on “CBS This Morning,” Harry says that racism was a “large part of” the reason he and Markle left the U.K. Markle, who is Black, also shared that a member of the royal family expressed concern during her first pregnancy about “how dark” the skin of their unborn child might be.

Across Twitter in the wake of Friday’s cover reveal, observers branded the entire thing “disgusting.”

It continued: “A black man murdered live for 9 mins with a cop’s knee on his neck isn’t idiocy. It’s real and using it as a reference for a far less important issue (although also to do with institutional racism) is bad taste at best but an inexcusable racist slur at worst.”

“People who don’t like Charlie Hebdo, I tell them to take their fingers off their asses and laugh a little. But for that, you have to understand the cartoons, that way you seem less stupid.”

“But the childish, lame attempt at “humour” its almost as if the magazine are like they are trying to be “dark & edgy” but fail miserably, no wonder they got shot up lol”

Also Read: Meghan Markle: Royals Were Concerned About Son Archie and 'How Dark His Skin Might Be'

This isn’t the publication’s first rodeo when it comes to stirring controversy. It was once a little-known French satirical paper, focused on skewering political figures, right and left-wing ideas and taking down sacred cows – including Islam. In 2015, two Islamist gunmen stormed into its offices and killed at least 10 journalists and wounded 11 others. 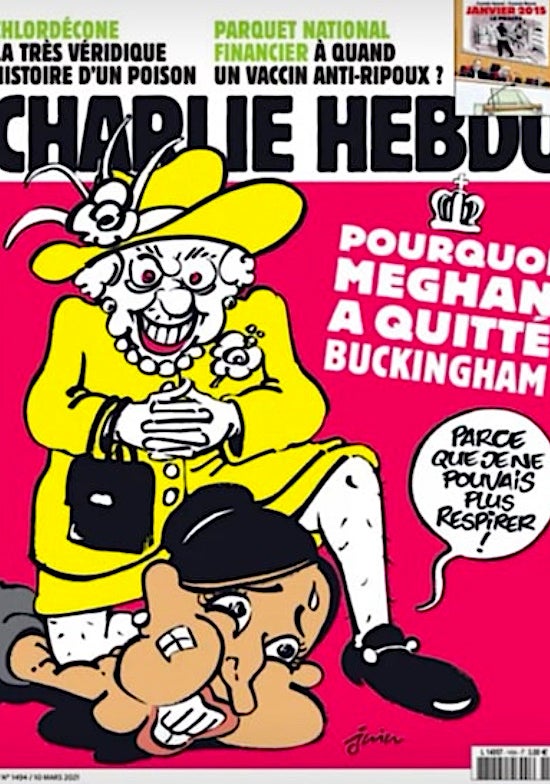