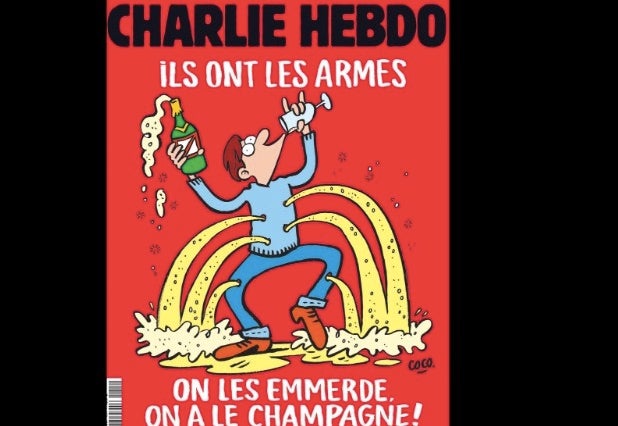 “They got the weapons — Screw them, we got the Champagne!” the cover (pictured above) says.

It’s the latest in what’s now become a routine of defiant covers from the satirical magazine, which was, of course, the target of a terrorist attack on Jan. 7 that killed 12 employees.

After that attack, the first new cover displayed a tearful prophet Muhammad holding up a sign that said, “Je Suis Charlie.”

In October, the New York Times revealed that the magazine has been a chaotic place in the months since the attack. There’s been an influx of cash, but an exodus of staffers no longer able to work under the dark cloud of the siege.

According to the Times, the “solidarity that once bound Charlie Hebdo’s close-knit staff has cracked under the trauma of the attacks and discord over how to divide the publication’s newfound wealth.”

Editor-in-chief  Gérard Biard told the Times that trying to keep the staff together has been a challenge.

“Charlie Hebdo is a newspaper where people scream at each other,” he said. “What changed was the violence,  trauma we experienced, to which every person reacts very differently.”