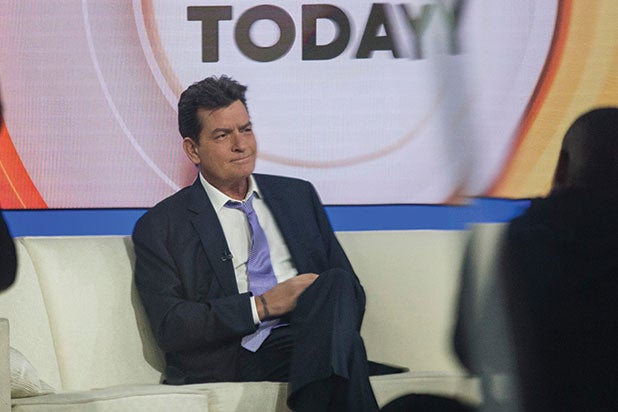 Charlie Sheen revealed on Tuesday that he was diagnosed as HIV positive four years ago, and fans have quickly taken to social media to send support the actor’s way.

“Hang in there Charlie Sheen, hope all those people you have helped are there for you,” one user tweeted.

“Feeling sad for Charlie Sheen,” said another. “No one deserves this!”

The former “Two and a Half Men” star said that after experiencing cluster headaches and “insane” migraines he was hospitalized before receiving the diagnosis. “I thought I had a brain tumor,” he said. “I thought it was over.”

Sheen followed up his appearance on NBC’s “Today” with an open letter promising his days of partying are behind him, and “philanthropic days” lie ahead.

See the supportive tweets below.

@charliesheen dont be shame bruz, fuck @Drake coz you lived YOLO, not him…!!! drugs, sex, rocknroll & rich as as a mofo… Prayers bruz!

It doesn't matter that Charlie Sheen has been a joke for years, I feel bad for him and his kids. It's sad no matter who it happens to.

Feeling sad for Charlie Sheen. No one deserves this! #CharlieSheen

I don't care how you feel about Charlie Sheen. If you make jokes about HIV, you're showing you have no empathy for HIV-positive people.

@charliesheen Charlie,I hope that today starts freedom and peace in your life from now on..God bless

We loved when he was drinking tiger blood and when he was winning so let's continue to love n support @charliesheen https://t.co/b8kF3yzka2

This Charlie Sheen news though ????

People who laugh at Charlie Sheen for having HIV are disgusting. Im ashamed of you tbh.

@charliesheen may you know that HIV does not change your extraordinary talent and movie history. Keep moving forward.