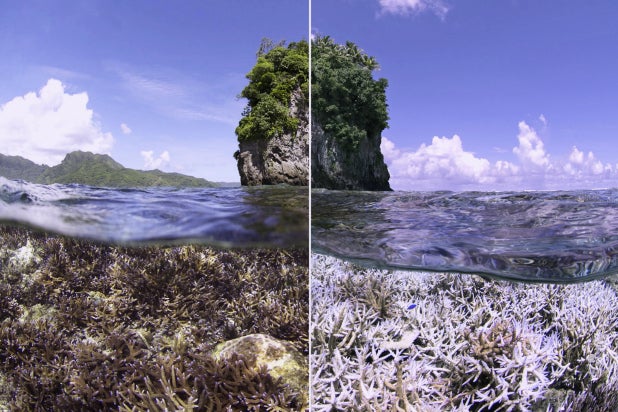 Jeff Orlowski is chronicling change. In “Chasing Ice,” he followed National Geographic photographer James Balog as he set out to capture shifting glaciers. Orlowski’s latest, “Chasing Coral,” sees the director diving headfirst into another obsession: the vanishing act of the world’s coral reefs.

Our entry point into the abyss is a team of motivated and knowledgeable divers, photographers and scientists. Collectively, they’ve decided to embark on a mission to understand why these reefs are disintegrating. It is, from the get-go, a somber pursuit. Many of the team members are fully aware of how our coral reefs got to this place, and even Orlowski has a basic understanding of our missteps.

But “Chasing Coral” doesn’t exactly lead with despondency; that’s for the end. Out of the gate, Orlowski is gung-ho on creating a nautical thriller, featuring men at sea, miles away from the outside world. He employs many of the methods used in “Chasing Ice”: The score is reminiscent of what you’d hear in a Jason Bourne movie — quick, brooding percussion, sparse (but ominous) piano, a well-endowed string section. Orlowski knows how to establish atmosphere. He wants us to be enveloped by the water.

So much so that, at times, “Coral” plays like a sliding screensaver, replete with sumptuous shots of life underwater. From the Caribbean islands to the coasts of Australia, Orlowski uses intricate time-lapse camera rigs to show us what we traditionally can’t see. This footage is breathtaking — for about five minutes. When it comes to resplendent, fluorescent imagery, 2017 is an embarrassment of riches. There are innumerable films and TV series dedicated to presenting sea life. National Geographic, especially, seems to be on the cutting edge here.

Eventually “Coral” moves out of its aesthetic-first interlude. It’s around the 55-minute mark that the movie finds its stride. Led by Richard Vevers (CEO of The Ocean Agency) and “coral nerd” (yes, those exist) Zack Rago, we begin to understand the plight of coral reefs. There’s both a practical and emotional angle to this narrative.

“We have half-billion to a billion people that rely on coral reefs as their main source of food,” says Dr. Mark Eakin. To these people, coral reefs are not merely a visual fascination; they’re a necessity for survival.

The undercurrent to the film is that our future, which includes climate change, is either going to be “bad or really bad.” Eroding coral reefs (due to a stress response called “coral bleaching”) is just the tip of the iceberg. This declining environment seems to be irreversible. The damage was done long before we understood the victim or the culprit.

In essence, “Chasing Coral” is a response to absence. “This is going on,” warns Rago, “and no one is noticing.” This places the documentary somewhere at the intersection between art and advocacy. The deck often leans toward the latter. Some will find Orlowski’s approach questionable, antithetical to a documentarian coda that doesn’t really exist. Jeff Orlowski is not Errol Morris. He’s not Frederick Wiseman, he’s not Werner Herzog, he’s not Alex Gibney.

“Chasing Coral” is not impartial. It’s staunchly pro-life, in the truest sense of the term.