Harris pleaded guilty to two counts in the criminal indictment – receipt of child pornography and traveling with the intent to engage in illicit sexual conduct. His sentencing is set for June 28, the U.S. Attorney’s Office Northern District of Illinois said.

Harris, who rose to national prominence on the Netflix docuseries “Cheer,” was arrested by the FBI in September 2020, after a pair of twin brothers accused him of sending one of them sexually explicit messages and requesting nude images over social media starting when they were 13 years old. 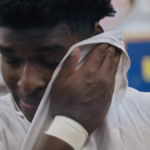 The lawyer representing the two boys said their mother was key to the case.

“This was made possible because our clients’ mother, Kristen initially had the courage to report Harris to the FBI and provided evidentiary proof of the manipulation, sexual harassment, abuse, and exploitation that her sons had suffered,” attorney Sarah Klein said. “We now urge the authorities to undertake a thorough investigation of the United States All Star Federation, Varsity Spirit, and Cheer Athletics to determine which of their executives, employees, and representatives could have stopped Harris’ abuse and failed to do so.”

The boys’ mother was upbeat over Harris’ plea, saying in a statement that she was hopeful the ordeal they went through was not “in vain.”

“In an effort to put a stop to a serial predator and avert harm to other children, my sons took the brave step of speaking publicly about the sexual abuse they suffered at the hands of Jerry Harris,” she said. “Harris’ admission of guilt today gives me hope that the pain and grief that my sons have suffered as a result of speaking up has not been in vain.”

Harris’ attorney did not immediately return TheWrap’s request for comment.

A member of Navarro College’s decorated Bulldogs Cheer Team, Harris was one of the stars of the Netflix documentary series, known for his signature “mat talk,” which involves shouting praises at his teammates to encourage them during practice. He has since made other TV and social media appearances alongside the likes of Oprah Winfrey, Joe Biden and Ellen DeGeneres.

Season 2 of “Cheer,” which was released in January, addressed the criminal charges against Harris and included interviews with the twin boys who accused him.