After being challenged by John Oliver to post a, shall we say aggressive, tweet on Sunday, Cheerios has officially responded. And now, they’ve issued a challenge of their own for the host.

Though there was no new “Last Week Tonight” episode over the holiday weekend, Oliver did release a new segment exclusively to his YouTube channel. During the nearly seven-minute long segment, Oliver lamented the lack of variety and excitement in cereal brands lately.

The host specifically called out Cheerios, arguing that their official Twitter account is just too boring. So, Oliver challenged the brand to spice up its Twitter account by tweeting “F–k you.” If they tweeted just those two words, Oliver promised to donate $25,000 to the charity of Cheerios’ choosing. The late night host then added that he’d double the amount if Cheerios tagged a random user in their tweet.

Indeed, the challenge made it onto Cheerios’ radar – but they didn’t do what Oliver challenged them to. Instead, they offered a compromise, followed by their own challenge for the host. 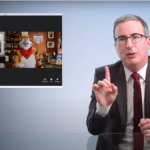 In response, the cereal’s Twitter account posted “You know we’re a family brand so we can’t drop the F-bomb. We’ll donate $50,000 to @nokidhungry. We’ll also donate $50,000 to the charity of your choice if you tweet, “Families make good go round.”

Of course, being the family brand they are, Cheerios subbed in the bomb emoji for “F-bomb” and added a yellow heart to the end of the tweet that Oliver is meant to post.

As of this writing, neither John Oliver’s personal account, nor the official “Last Week Tonight” account have responded. But Oliver does always seem up for a challenge…

UPDATE: As of Wednesday, June 2, Oliver did reply to Cheerios’ counter-challenge. And it’s as messed up as you’d expect. Check it out here. 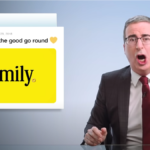