When you enter a challenge war with John Oliver, you best be ready to finish it, because the late-night host is almost surely going to take it too far. And that’s exactly what he did with a challenge given to him by Cheerios.

Over the weekend, Oliver released a new segment that was quite literally just a 7-minute rant about cereal. In it, the host specifically called out Cheerios for having a boring Twitter account. So, Oliver challenged the brand to spice things up by tweeting “F— you.” If they tweeted just those two words, Oliver promised to donate $25,000 to the charity of Cheerios’ choosing. The late-night host then added that he’d double the amount if Cheerios tagged a random user in their tweet.

In response, the cereal’s Twitter account posted, “You know we’re a family brand so we can’t drop the F-bomb. We’ll donate $50,000 to @nokidhungry. We’ll also donate $50,000 to the charity of your choice if you tweet, ‘Families make good go round.'” 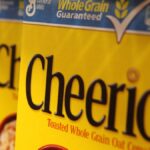 And that’s exactly what John Oliver did — he just chose to include photos of some messed up families. “It’s a deal! Families make good go round,” he tweeted, accompanied by a photo of the Manson family.

But this wasn’t a one-and-done for Oliver. Oh no, he kept going, posting another tweet with the requested verbiage, but swapping out the photo for one of the Menendez brothers. Then, he added one more, using a photo referencing the Sackler family, who many believe to be the root of America’s opioid crisis.

As the cherry on top of his tomfoolery, John Oliver then added a tweet that followed through on his original challenge to Cheerios, cursing out Twitter user @AlexPon21. At the time of this posting, that account only had 13 followers.

And because it felt so good, “Last Week Tonight” even followed through with their original donation plan, pledging an additional $50,000 to No Kid Hungry.