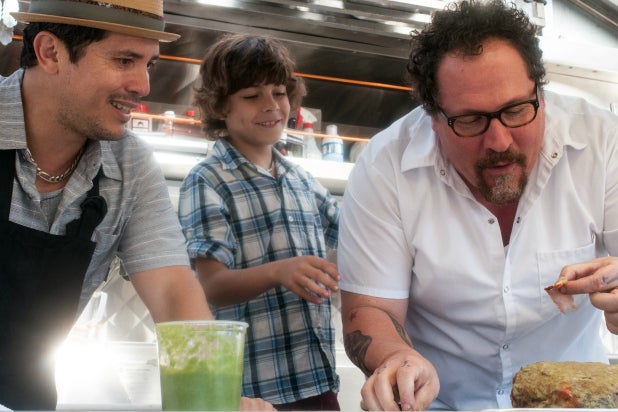 After adapting the “Iron Man” and Cowboys & Aliens comics for the big screen, Jon Favreau took a break from helming big-budget spectacles to make “Chef,” his first writing-directing effort since 2001’s “Made.”

The food-centric comedy is presumably a more personal project than his output inside the Marvel machine; interestingly, its middle-aged protagonist is miserable churning out the same moneymaking meals day in and day out instead of creating the inspired and unique dishes he wants to share with his customers. And yet for all its exertions to champion individual vision, “Chef” has none.

A tattooed, bespectacled and bearded Favreau stars as Carl Casper, a once-promising LA chef whose waning star goes into free fall when he takes his Twitter war with food critic Ramsay Michel (Oliver Platt) offline. After inviting Ramsay to his restaurant, the red-faced chef screams at his guest, “You sit and you eat and you vomit those words back! It hurts!” When footage of his freak-out goes viral, his reputation in the food world goes the way of the durian.

After sulking for a few days, Carl is whisked away to his native Miami by his rich ex-wife Inez (Sofia Vergara, perpetually mugging), along with their son Percy (Emjay Anthony). With the help of Inez’s first husband, eccentric businessman Marvin (a misused Robert Downey Jr.),  Carl gets into the food-truck business to sell Cuban sandwiches and yucca fries with banana ketchup. (You can try them at co-producer and kogi chef Roy Choi’s Sunny Spot restaurant in Venice).

Like Downey Jr., Dustin Hoffman and a brunette Scarlett Johansson are squandered in tiny, insignificant roles.

Carl somehow convinces his former sous-chef Martin (John Leguizamo) to fly out to Florida on his own dime to work in the truck for free, and thus the two men and Percy, until now somewhat estranged from his father, drive the vehicle back to California, selling sandwiches in larger cities along the way with the help of social media.

Most of Favreau’s film, then, is a hangout movie with these two and a half chefs. Leguizamo offers a couple of chuckles by acting the slightly vulgar clown, as when he dries his huevos, humid from the Florida heat, with corn starch. It’s adorable to see nine-or-so Percy embarrassed by the grown men’s vague but unmistakable allusions to sex.

While these characters are from unpleasant company, they aren’t really all that interesting, either. Many of the road-trip scenes just involve Carl telling his son what a good job he did that day.

Favreau evidently aimed to make a crowd-pleaser, but “Chef” is like a Big Mac – it slides down too easy, too quickly. There’s no feeling of substance, nothing to chew on. It’s a sunny, attractively crafted film with vibrant Latin flavors, and yet its trite message of ” just be yourself” feels like the kind of obligatory moral tacked onto children’s movies. As a foodie fairy tale, it certainly ignores the difficulties of starting and sustaining a business, and Carl’s effortless glide into victory and triumph feels vaguely insulting to anyone who’s ever had to try hard at anything.