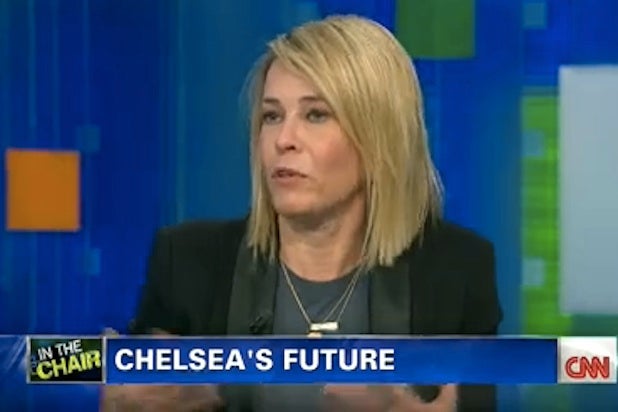 Handler appeared on “Piers Morgan Live” Monday to promote her new book “Uganda Be Kidding Me” and talked about the pressures that come with being the only female talk show host in late night.

“There have been so many times in the press where I have been marginalized,” Handler said. “I don’t want to scream and yell about everything. I don’t want to be a squeaky wheel, I just want to be respected for what I do. You don’t have to like me, but you have to acknowledge I’m in the landscape of late night television. That’s my only issue. I made a big deal about the last article that Bill Carter wrote in the New York Times, and now if I decided not to do late night any more, being the only woman in late night, it would be a problem, because then I’m leaving that space empty, so I kind of have to find someone to replace me, that’s what I’m doing right now.”

Later in the interview, Handler playfully mocked the CNN host for tweeting during the commercial break.

“After the show, where do you go? What do you do?” Morgan pressed.

“I have to come here and tolerate this nonsense,” Handler lamented.

“This nonsense is designed to flaunt your tawdry book,” Morgan shot back.

Handler explained she was a workaholic and would do more book signings after the show.

“I wish you did,” the E! host quipped. “I mean in the middle of the commercial break, I want your viewers to know…you can’t even pay attention for 60 seconds! You’re a terrible interviewer!”

“You just weren’t keeping my attention,” he countered.

“That’s not my problem!” Handler exclaimed. “This is your show, you have to pay attention to the guest you invited on your show.”

“Listen, it doesn’t matter how interesting I am, you signed up for this job!” Handler replied.

“Of course it does!” he retorted.

“Well, maybe that’s why your job is coming to an end,” she concluded bluntly.

Watch the clips below: