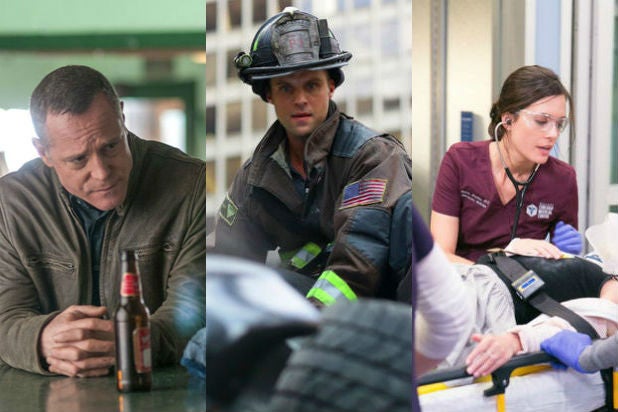 The spinoff is now the third series in the Dick Wolf Chicago universe, which also includes the strong “Chicago Fire” and solid “Chicago P.D.” The way things are looking, a theoretical “Chicago DMV” could even hold its own in primetime.

On Tuesday, “Med” was the top scripted show of the night, premiering to a 2.2 rating/7 share in the advertiser-coveted 18-49 demographic, along with 8.6 million total viewers. For an imperfect comparison, that 9 p.m. debut was 29 percent above the Season 3 premiere of “Chicago P.D.,” which aired at 10 o’clock.

It hasn’t all been roses for the “Chicago” shows this season: “Fire” dropped 31 percent in ratings with its Oct. 13 premiere. To be fair, however, it was up against a CNN Democratic debate, which sent several broadcast offerings crashing by double digits.

Of course, scheduling also played a part in Tuesday’s triumph. Newcomer “Chicago Med” had the benefit of premiering after a “Voice” lead-in. And the 9 o’clock slot wasn’t even originally meant for “Med” — NBC swapped out “Heartbreaker” due to Melissa George’s pregnancy.

It also provided a new platform for “Fire,” which reached its top rating without its own “Voice” lead-in since last November. NBC regularly wins Tuesdays with that combo, and fares well on Wednesdays with “Law & Order: SVU” and “P.D.” While “Empire” still rules that roost, NBC finished first in viewers last week.

“Med’s” biggest contribution may come with a mega-mega-crossover slated for February. Wolf’s “Fire” and “P.D.” previously played with his New York-based series, “SVU,” to excellent numbers.

In total viewers, excluding each show’s season-premiere episodes, both of the two most-watched telecasts last season for “Law & Order: SVU” and “Chicago P.D.” came with the November and April crossover events.

“Fire” and “P.D.” were renewed earlier this month for their fifth and fourth seasons, respectively.