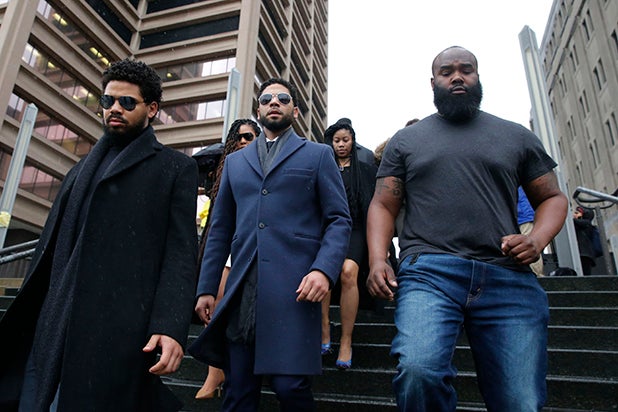 Chicago prosecutors dropped all charges against “Empire” star Jussie Smollett on Tuesday, but the State’s Attorney’s office said it stands behind the investigation and having brought the charges in the first place.

Magats, the lead prosecutor on Smollett’s case and the person whose decision it was to dismiss the charges, later went even further in an interview with CBS Chicago. “I do not believe he is innocent,” he told reporter Adriana Diaz.

Smollett, who had been accused of staging a hate crime, was indicted earlier this month on 16 felony counts of filing a false police report. Magats told the Times that the decision to drop the charges was made after Smollett agreed to serve community service and forfeit his $10,000 cash bond to the city of Chicago.

“Here’s the thing — we work to prioritize violent crime and the drivers of violent crime,” the prosecutor said. “Public safety is our number one priority. I don’t see Jussie Smollett as a threat to public safety.”

"Do you believe that he is innocent?" CBS reporter @adrianasdiaz asks First Assistant Cook County State's Attorney Joseph Magats about dropping charges against Jussie Smollett. "I do not believe he is innocent," Magats responds. pic.twitter.com/NEWZuD2aBe

The Cook County State’s Attorney and an attorney for Smollett did not immediately respond to TheWrap’s request for comment.

Magats’ earlier comments came within minutes of a press conference from Chicago Police Superintendent Eddie Johnson and Mayor Rahm Emanuel in which both voiced strong displeasure with the state’s attorney’s office decision.

“This is a whitewash of justice,” Emanuel said, noting that a grand jury indicted Smollett based on a “sliver” of the evidence police had gathered in the case.

Standing behind his detectives and their investigation, Johnson said Smollett’s team “chose to hide behind secrecy and broker a deal to circumvent the judicial system.”

“Do I think justice was served?” Johnson said. “No.”

In their press conference earlier on Tuesday, Smollett’s attorney, Patricia Brown Holmes said that “no deal” was struck with prosecutors, because the actor “voluntarily” agreed to forfeit his bond.

Smollett, who has consistently denied accusations that he enlisted two men to stage the racist and homophobic attack, told reporters that he would “like nothing more than to get back to work and move on with my life.”

“I have been truthful and consistent on every level since day one. I would not be my mother’s son if I was capable of one drop of what I’ve been accused of,” he said. “This has been an incredibly difficult time. Honestly, one of the worst of my entire life. But I am a man of faith and I am a man that has knowledge of my history and I would not bring my family, our lives or the movement through a fire like this. I just wouldn’t.”