Chicken Soup for the Soul Entertainment, which operates Crackle and other ad-supported video on demand channels, on Tuesday announced plans to acquire the assets of 1091 Media to nearly double its content library.

The $15.6 million deal includes roughly 4,000 hours of film and TV series, including the acclaimed docs “The Last Blockbuster,” “Linda Ronstadt: The Sound of My Voice” and Taika Waititi’s breakout indie film “Hunt for the Wilderpeople.”

Chicken Soup for the Soul is funding the deal with $8 million in cash, $2 million in newly issued Series A stock at $25 per share and 375,000 shares of Class A common stock valued at $14.80 per share. The company projects $10 million-plus in revenue in the next 12 months, with roughly $3 million of incremental EBITDA. (Class A stock was down nearly 2% to $9.18 in early trading on Tuesday.)

The deal is expected to close in mid-March. 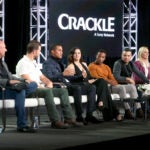 “This is the next evolution in our content library strategy,” Elana Sofko, chief strategy officer for Chicken Soup for the Soul Entertainment, said in a statement. “The genre content with loyal fan bases from 1091 Pictures includes music, over a dozen different sports, paranormal, and much more, enabling us to continue to grow both our streaming services and our FAST channels. We will also continue growing the business that the 1091 Pictures team started and augment it with additional opportunities from the combined catalogue.”

David Fannon, president of Screen Media Ventures, a Chicken Soup for the Soul Entertainment company and the supplier of content to Crackle Plus, added: “The 1091 Pictures team transformed their large content library into a scalable, modern distribution platform with a compelling slate of channels that are a pragmatic addition to our existing assets. The 1091 Pictures’ pipeline of over 350 titles per year will provide a steady supply of new content to the company for years to come.”