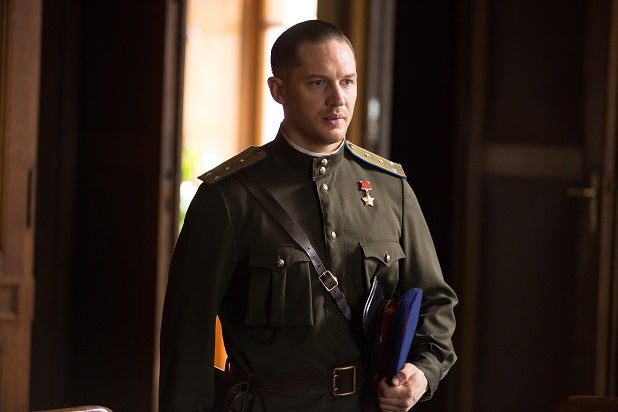 A Soviet-era slog through crime and corruption, painted in the grim, dim shades of muck, blood, moss and bark, director Daniel Espinosa’s “Child 44” turns a best-selling period-piece procedural into a slow, tedious thriller almost totally devoid of thrills. While the cast is full of exemplary performers — Tom Hardy, Gary Oldman, Noomi Rapace, Joel Kinnaman and more — the fault here is not in the stars, but in the material.

On the page, Tom Rob Smith’s novel won awards and hit best-seller lists worldwide by reflecting the paranoia and policies of Stalin’s Russia through the lens of a homicide investigation, but this screen adaptation feels too long and grim, stuffed with plot and period detail at the characters’ expense.

Adapted by novelist and screenwriter Richard Price (“Clockers,” “Sea of Love”), “Child 44” revolves, nearly obsessively, around the defining Catch-22 of life in the Soviet Communist era: Crimes like murder, we’re repeatedly told, are diseases of capitalism and Western decadence, and therefore cannot take place in the worker’s paradise Stalin has made. But Leo Demidov (Hardy), onetime war hero and now a respected member of the State Security Force, can recognize evil in a crime scene beside railroad tracks, where a boy is found with surgical wounds on his naked body.

The official explanation is that the boy was struck by a train, one accepted by the grieving father, who is one of Leo’s fellow officers. Leo refuses to play along, finding 43 other child murders strung across Russia that were either explained as accidents or foisted on convenient stooges, working a case his superiors insist doesn’t exist.

All police stories function as sideways sociology: Examine the men and women who enforce the rules, and what happens when those rules are broken, and you get a much bigger picture than that of a single murder. “Child 44” could have gotten plenty out of depicting the challenges of homicide investigation in a society where cover-up and conspiracy are default settings, but Hardy’s Leo has a whole other sea of troubles opposing him as he works the case. There are deadly allegations against his wife Raisa (Noomi Rapace), leading to their subsequent exile from Moscow. Leo’s ambitious underling and old friend Vasili (Joel Kinnaman, more glower than man) tries to thwart him at every turn as well.

Shot by Oliver Wood (“The Bourne Identity,” “Face/Off”), “Child 44” is attractive to look at and full of impressive production values, but the scenes and settings never coalesce into one through-line of a story as Hardy and Rapace go from Moscow to the hinterlands and back, repeatedly.

Making matters worse is the fact that the book’s atmosphere of tension and repression just turns to dead space and silence interrupted occasionally by Jon Ekstrand’s blaring, overdone music on the big screen, with Hardy never giving the lead role much more than what’s depressingly becoming the actor’s usual: another handsome brooder who’s quick with his fists and curt with his words. (This is in part why Hardy was so good in “Locke” — his character in that impressive film doesn’t beat up anyone but himself.)

Espinosa’s two prior films, “Easy Money” and “Safe House,” were fairly standard-issue exercises in flash and action, cynical and snappy and fleet. In “Child 44,” however, key action scenes like a desperate fight on a prison train and a struggle for survival in a mud-filled trench are so dirty and dark that it’s nearly impossible to make out who is doing what to whom. Smith’s source novel is a bleak and lurid affair, and on screen that story gives us very few people to actively root for as Hardy and Rapace get caught between dismissive superiors and a poisonous ex-comrade thwarting their investigation to find a cardboard killer.

The 137-minute running time is also a drag on the momentum of the affair, especially as the movie works through several endings in a strenuous attempt to provide one bit of joy to cut through the murk and murder of what’s passed. “Child 44” could have worked if it had been thoughtfully pared down and shortened and sharpened to fit the screen, but instead it feels like a page-to-screen adaptation so dedicated to being faithful that it forgot to be good.