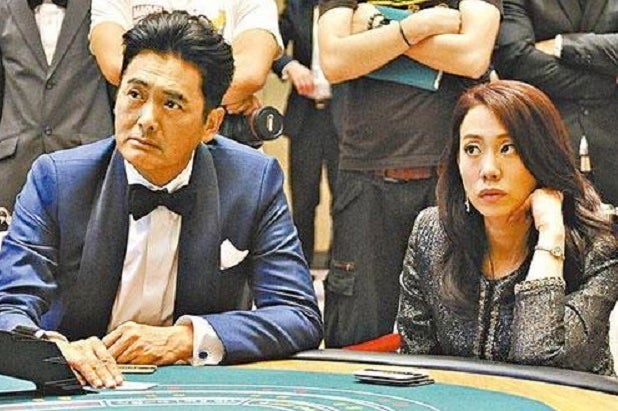 With “Jupiter Ascending” and “Big Hero 6,” along with local titles “From Vegas to Macau” and “Wolf Totem” leading the way, the top 10 films at China’s box office brought in around $73 million. That just topped the $72.3 million that the soft U.S. top 10, which was led by “Chappie,” totaled over three days.

The numbers come a week after we learned that China’s box office grosses were larger than those of the U.S. in February, the first time that Mainland films have ever had a bigger month. And a week before that, the Chinese New Year set off a box office explosion that produced holiday weekend grosses larger than any seen in the U.S. in more than two years.

One weekend is just that, of course. And the $13 million that Sony Pictures’ “Chappie” managed isn’t typically enough to cop the top spot in the U.S. Even if the Chinese box office were to double in size this year and hit $10 billion, it wouldn’t match North America’s, which is on pace to climb to a record $11 billion in 2015.

But reality and new revenues are taking the steam out of what’s been a hobby for Hollywood movie executives for years now guessing when China’s box office will grow larger than that of the U.S.

Recent developments have made it clear that it’s going to happen, and sooner than we expected. But what’s also happening faster are partnerships designed to cash in on the opportunities that growth has created.

“Everyone in Hollywood should understand that if they’re not exploring strategic partnerships with Chinese companies, not considering tailoring content for that market and not anticipating future continued growth in China, then they are going to miss out on huge potential revenues,” Rentrak senior analyst Paul Dergarabedian told TheWrap.

Sunday night, Valiant Entertainment and China’s DMG Entertainment announced that they are partnering to turn the indie comic book publisher’s stable of superheroes into movies, merchandise and theme parks in Asia.

With a cash infusion that the New York Times reported is “nine figures,” Valiant and its partner, the Neal Moritz-led Original Film, should now be better positioned to develop projects along the lines of “Bloodshot,” the Valiant Comics-based action film in the works at Sony. They’ll need U.S. studios to produce, market and distribute these movies, and Sony or another studio will have the inside track to get that business.

Disney was happy to share its record Chinese grosses from “Iron Man 3” with DMG, since the Beijing company’s presence as a partner eased its access into the market, and the studio’s “Cinderella” will debut there Friday. Ditto Paramount Pictures, which teamed with China Movie Channel and Jiaflix Enterprises on “Transformers: Age of Extinction,” and made more money at China’s box office than in the U.S.

Hollywood will have one significant edge in the market for the foreseeable future, Contrino believes.

“It will be a long time before Chinese movies can appeal globally the way American movies do,” he said. “The only way they can compete is to make deals with American brands, which are so strong internationally.”

Lionsgate Entertainment and China’s Hunan TV are near a $1.5 billion development partnership. Leading U.S. 3D tech firm RealD would be happy to see its stock rise as it’s circled by potential suitors from China, where it has invested heavily. IMAX has bet big on the growth of the Mainland market and is winning already. Most shareholders in Regal Entertainment would be glad to see the theater chain sold to a deep-pocketed Chinese investor, as rival AMC Theaters was to China’s Dalian Wanda Group in 2012.

“Eventually, there will be the financial equivalent of two Hollywoods, and I don’t see how that’s going to be anything but good,” Contrino said.

It isn’t just giant conglomerates and corporations that stand to benefit. There are no guarantees, and obviously not everyone will be a winner. But opportunities will increase for marketing executives, distribution experts, comic book writers, agents and actors as well.

“It’s a new and massive market and there is a lot happening there right now, so it’s a very good thing for actors,” said Michael Nilon, the agent who represented Nicolas Cage when he landed the lead in the action film “Outcast,” a Chinese-Canadian co-production.

Box office parity is fast approaching, and it’s becoming clear it won’t be the end of the world. There are plenty of hazards, like the 34-film limit on U.S. films and the restrictive Beijing government, as well as cultural road blocks to be overcome. But in this case, the bottom line is the bottom line.

If a larger Chinese box office comes along with increased opportunities for U.S. and Mainland companies to profit thanks to that massive market, does it really matter whose grosses are bigger?