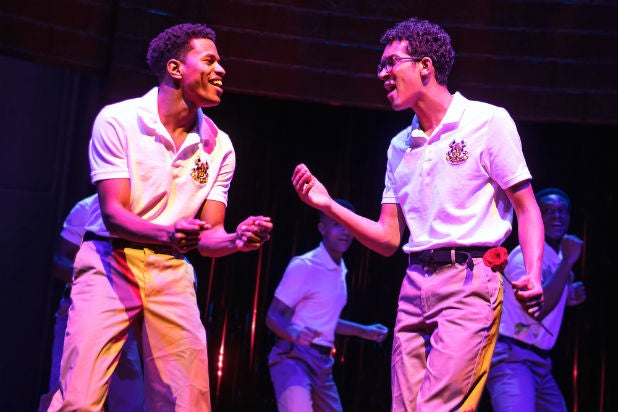 Pharus, the young black man at the center of Tarell Alvin McCraney’s Broadway debut “Choir Boy,” which opened Tuesday at MTC’s Samuel J. Friedman Theatre, is as comfortable in his gay body as Chiron, from McCraney’s Oscar-winning film “Moonlight,” is not.

McCraney doesn’t give us much background for why Pharus is so out, proud and gay as a teenager at an all-boys school. But he is, and his ease with himself is obvious even before Pharus opens his mouth to lead the choir at his school’s commencement ceremony.

Played by Jeremy Pope in his own Broadway debut, Pharus takes a few steps forward into the spotlight, which he relishes. But he isn’t able to sing more than a verse of the school song before being subjected to racial and homophobic taunts by his classmate and major nemesis, Bobby (J. Quinton Johnson).

Bobby also happens to be the nephew of the school’s headmaster and therefore occupies a place of privilege and protection at the Charles R. Drew Preparatory School for Boys. Regardless, for the next 90 minutes of “Choir Boy,” Pharus doesn’t let up in his determination to be the best, brightest and gayest.

Pope reprises his portrayal of Pharus from the original 2013 production at MTC’s Off Broadway theater. New to the cast is the equally marvelous Johnson, who presents a worthy opponent, making Pharus’s road to adulthood all the more difficult, and arresting, to watch.

“Choir Boy” is laced with music, from pop songs and African American spirituals. The latter charge a debate between Bobby, who thinks the lyrics helped slaves escape their condition, and Pharus, who believes it’s the music that emboldened generations of African Americans. And their fight over who’s right on the subject is just one of many no-holds-barred sparring matches.

Pope’s vocals can be more than a little indulgent, which might be the point. Pope also is set to star this spring as Eddie Kendricks in the Broadway bio-musical “Ain’t Too Proud – The Life and Times of the Temptations.” And there was plenty of great singing from those in the choir, including Nicholas L. Ashe, Daniel Bellomy, Jonathan Burke, Gerald Caesar, John Clay III, Marcus Gladney, Johnson and Eberhardt.

Camille A. Brown, whose credit in “Choir Boy” is “movement,” delivers amazingly kinetic choreography. Especially breathtaking is the staging of a class assignment where the students are asked to perform one of their parents’ favorite songs. A performance of L.T.D.’s “Love Ballad” begins as a solo (beautifully performed by Caleb Eberhardt), then turns into flashy boy-band number, and ends up as a sexual fantasy.

Chuck Cooper, as the all-wise headmaster, and Austin Pendleton, as a befuddled professor, also reprise their accomplished turns from the original 2013 production. Playing the drama’s sole white character, Pendleton makes the old teacher less embarrassing than he actually is. Would someone who marched with Martin Luther King Jr. really make so many politically incorrect gaffes in front of young black men?

“Choir Boys” ends with one of those gooey emotionally charged moments where an unbelievably tolerant member of the majority (a straight guy) offers a comforting hand, and a little something more, to the marginalized minority (a black, gay guy). It’s patronizing and rings false.