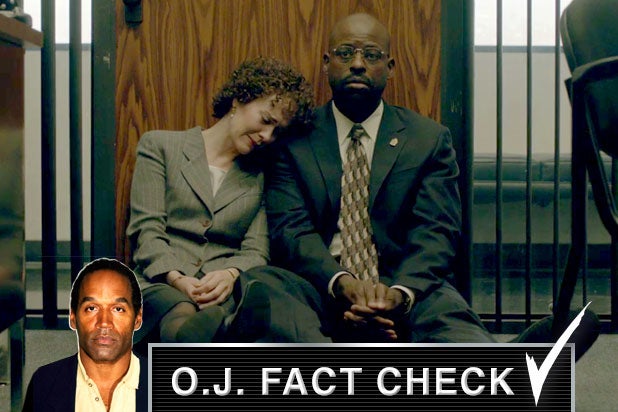 Episode 6 of “The People v. O.J. Simpson” finds Marcia Clark crying on Chris Darden’s shoulder, devastated that old topless photos of her on a beach have ended up in a tabloid. He gives her a pep talk that ends with him offering:

“If it helps any, you do look mighty good in that picture.”

Did he really say it? Welcome to O.J. Fact Check.

THE POINT OF THE SCENE
Besides emphasizing how much Marcia Clark’s privacy was invaded during the Simpson trial, the nude photo incident shows us how much Darden and Clark supported one another. The scene ends with Darden taking Clark’s hand, begging a question that has become one of the most propulsive emotional subplots of “The People v. OJ Simpson”: Whether Clark (Sarah Paulson) and Darden (Sterling K. Brown) will hook up.

I know, it’s dumb to wonder about during a double murder trial. But people did wonder.

“After the trial, with the injustice still bitter in my mouth, the question most often put to me was about Marcia,” Darden wrote in his memoir, “In Contempt.”

“I have spent far too much time walking through airports, denying that we’re getting married,” he wrote.

Darden says in the book that he and Clark did have what he could consider “a relationship,” though he does not answer the kinds of questions “Sex and the City” characters might ask each other at brunch. (Sorry, “The People v. O.J. Simpson” has me really ’90s nostalgic lately.)

THE FACTS
Here’s what Darden said he told Clark, according to “In Contempt” (excerpted by Newsweek):

After she left court one day crying, I stood in the hallway, looking at a tabloid that had published 15-year-old topless photographs of Marcia with her first husband on a nude beach in France.

“Hey.” I stuck my head in her office.

“I can’t believe it,” Marcia sniffed. She naturally thought that photographs like that would remain private. Marcia wiped at her eyes. “So, what did you think of the photos?” she asked.

“Just be honest,” she said.

She looked up from the tissue, smiled for a second, and then burst into laughter. “Some therapist you’d make, Darden.”

THE VERDICT
“The People v. O.J. Simpson adds some dialogue to the conversation about Clark’s state of mind when the topless photos appeared. According to Darden, he said she looked “pretty good.” In the show he says “mighty good.” Same difference.

In Darden’s account, Clark asks for his opinion. In the show, he offers it on his own. Not a huge difference.

The show thoughtfully captures the ambiguity of the real relationship between Clark and Darden. Were they just friends? More than friends? Did it affect the way they tried the case?

We know this much, people at the airport: They did not get married.

As for what did happen … we’ll address that in a future O.J. Fact Check.