Tennis legend Chris Evert announced on Friday that she is undergoing chemotherapy to treat stage 1 ovarian cancer, and as a result will cover the Australian Open for ESPN remotely.

Evert announced the diagnosis in an ESPN.com article cowritten with her friend and colleague Chris McKendry.

“I wanted to share my stage 1 ovarian cancer diagnosis and the story behind it as a way to help others,” Evert said in a tweet sharing the ESPN article. “I feel very lucky that they caught it early and expect positive results from my chemo plan. Thanks to Chris McKendry for her friendship and for co-writing this very personal story with me. And thanks to all of you for respecting my need to focus on my health and treatment plan. You will see me appear from home at times during ESPN’s coverage of the Aussie Open.” 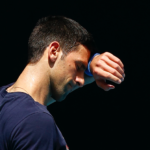 Evert is an 18-time Grand Slam winner who won 157 singles titles and 32 doubles titles during her playing career. She is still the record holder for longest streak of winning major titles in consecutive years — 13 — and holds the highest winning percentage in single matches in tennis history for both male and female players. She also won the Australian Open twice, in 1982 and 1984.