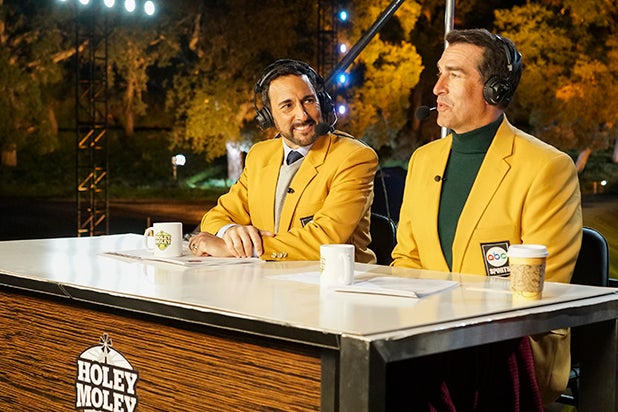 “The Bachelor’s” Chris Harrison, Olympic gold medalist Greg Louganis and “Police Academy” star Steve Guttenberg are among the stars set to stop in on “Holey Moley II: The Sequel,” TheWrap has learned.

The new season will also see visits from Jon Lovitz and Michael Winslow in addition to regular commentators Rob Riggle and Joe Tessitore when the 13-episode extreme mini-golf competition series returns to ABC on Thursday, May 21.

Per ABC, the sophomore season will “showcase self-proclaimed mini-golf lovers from around the country as they compete head-to-head through an epic obstacle golf course” and vie for their spot in the finale, which will determine the winner of the $250,000 prize.

See descriptions of the courses below.

PARRRRR MATIES! Golfers head out to the open tees to face the “Holey Moley” pirate, Jon Lovitz. Starting on a pirate ship, golfers have a mini-putt off that determines whether the pirate chips your ball to the other side of the course with one eyepatch or two, which is sure to leave the loser with a worse ball position. Then it’s time to walk the plank and leap onto the circling shark. If they miss and fall in the water, it’s a stroke penalty. Once golfers wash ashore, they’ll finish the hole, putting around pirate treasures and palm trees.

What seems like a simple hole may actually be one of the most difficult. Focus is the name of the game on The Distractor. One at a time golfers putt 12 feet to try to get the ball into the hole. But, with a rotating wall revealing a huge distraction, will the golfer stay focused or will they miss the shot? The golfers take turns until someone sinks the 12-foot putt. Michael Winslow appears as one of our many distractions this season.

Our two golfers prepare for the dive of their life. The better the dive, the better the ball placement on the green. Everything is on the line, but on this hole, there is a third mysterious competitor and he is secretly an aspiring Olympic caliber diver. With only the top two scores moving on, one of our contestants are surely in trouble.

Our esteemed set of judges include world-renowned Olympic gold medal diver Greg Louganis, our very own Sir Goph, and of course, actor and national treasure, Steve Guttenberg! The two mini-golfers attempt their specific dives — an inward 1.5 twist for example — and then flail into the water. They are mini-golfers after all! The judges reveal their scores, which are pretty nice. They are supportive.

But there is a twist. When the Olympic caliber diver goes, it is perfection. A gorgeous dive. But, in the universe of Holey Moley, that matters not. Louganis is unimpressed, giving him a terrible score. But it is Steve Guttenberg who takes the cake, and unlike we’ve ever seen him. He tears into the pro diver for his insulting dive. Guttenberg goes nuts, threatening to tear the pro divers feet off. He gets the lowest score, thereby eliminating the comedy plant, and our two mini-golfers (and terrible divers) move on to the green to putt it out for the win.