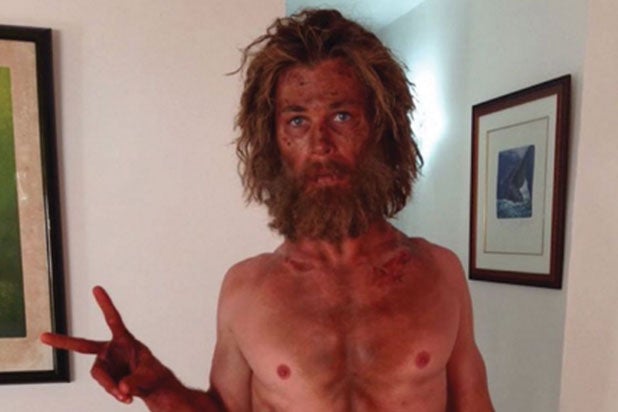 Chris Hemsworth‘s bulky biceps and six-pack abs are no more, as the actor shared a photo of himself after he underwent an extreme diet for his upcoming movie, “In the Heart of the Sea.”

“Just tried a new diet/training program called ‘Lost At Sea.’ Wouldn’t recommend it..#IntheHeartoftheSea,” the actor captioned the photo he via Instagram shared over the weekend.

In July, the Aussie had told Entertainment Tonight that in order to prepare for the film, which follows the story that inspired the Herman Melville classic “Moby Dick,” he consumed approximately 500 calories a day.

“We have to shoot the really skinny stuff where we drop down to 5, 6, 700 calories a day, a good three or four weeks and it’s going to be pretty uncomfortable, but we’ll be together in our misery,” Hemsworth told ET. “I spend more time thinking about food than anything else at the moment.”

In the film, Hemsworth plays a 19th century sailor, who gets caught in a war with a gigantic sperm whale. After the whale crushes their ship, the crew has to do the unthinkable, which includes resorting to cannibalism, to stay alive.

Video: Chris Hemsworth Faces a Furious Sperm Whale in New 'In the Heart of the Sea' Trailer

With “Thor: Ragnarok” coming out in 2017, Hemsworth will have to gain back all his muscles.

See the scary and shocking photo below.