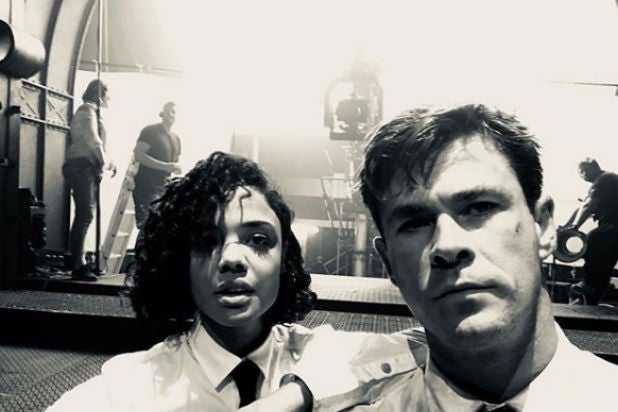 Two years after teaming up on Sakaar in “Thor: Ragnarok,” Chris Hemsworth and Tessa Thompson will reunite next year in “Men in Black: International,” and Hemsworth has released the first picture of them tracking down rogue aliens.

The fourth installment of the “MiB” franchise will see Hemsworth and Thompson fill in the shoes of Will Smith and Tommy Lee Jones. The new film will take MiB beyond New York to show the global operations of the secretive alien agency, as a new generation of agents look to uncover a mole inside the organization.

“Happy to say the streets of London are now safe again. You’re welcome world,” Hemsworth wrote in the Instagram post.

“Straight Outta Compton” and “The Fate of the Furious” director F. Gary Gray is in charge of the project, which also stars “Mission: Impossible” breakout Rebecca Ferguson and will be released June 14. Check out Hemsworth’s Instagram post below.

#FBF shooting MIB with my partner in galaxy protection @tessamaethompson when we were ripping aliens a new one. From memory, this shot was taken in between set ups when Tessa and I noticed some criminal activity on the streets in London. We immediately drew our laser guns and took down one of the largest crime syndicates in the city. Happy to say the streets of London are now safe again. You’re welcome world. #MIBInternational ????️ @meninblack