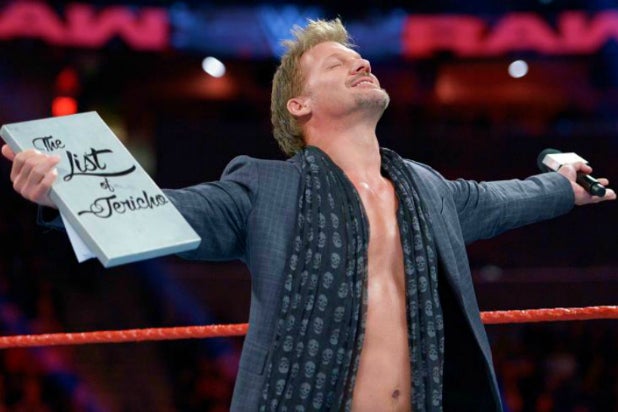 This afternoon, I took up almost 20 minutes of Chris Jericho’s super-busy Monday, asked him a few borderline-asinine questions, and didn’t even make “The List.” To say I’m disappointed would be an understatement.

After all, there is arguably no better WWE accessory this winter than Y2J’s “The List of Jericho,” generally reserved for those the pro wrestling icon labels a “stupid idiot.” Of course, like so many things meant to be insulting to the “Monday Night Raw” crowd, the fans eat it up — and replicas of the prop now sells as official WWE merchandise.

Naturally, we had to ask the host of PodcastOne’s “Talk Is Jericho” how many “lists” there are, where they currently reside, and what he was actually writing on them this whole time.

“There are a couple of them,” the Fozzy frontman began. “I think if you looked back, we never expected it to be so popular. The first couple of lists were just an orange clipboard, or something like that. Then we actually got an official one made. I wanted it made of steel so you could use it as a weapon.”

That makes plenty of sense in Vince McMahon’s playground.

“So, there are two of those, officially,” Jericho continued. “I carry one with me at all times, and there’s one that stays with the show in case [mine] gets lost. Now they’re making lists [for merch], so if worst comes to worst, you can just use a toy list.”

Never has a modified Trapper-Keeper been so cool. But what was the dude writing on his now-famed notepad anyway? After all, a lot of people made “The List,” and on live television, time is money.

“I was actually writing the names of the people. Or just scrawls,” Jericho said. “They may not actually make sense, but it would actually be something related to what [I told the crowd] I was writing down.”

“If you looked at those original sheets, you’d see just a bunch of chicken scratch, because [I wasn’t] actually paying attention,” he added. “If I [said], ‘Brace-face in Row 3: You just made The List!’ I’d write ‘B, R,’ line, line, line, line, line — because you don’t have time to write it all out.”

“I guess the concept is making it look like you’re writing something, but not really writing the whole thing,” Jericho concluded in indulging us.

Check back with TheWrap in the coming days for more of our interview with Jericho.