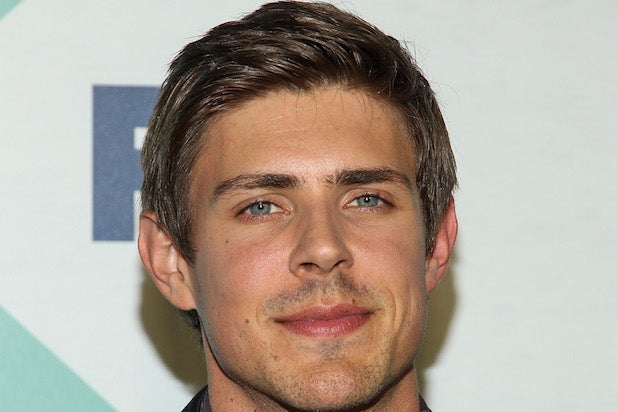 Chris Lowell is best known for playing Piz on “Veronica Mars” and Dell on “Private Practice,” but he has creative ambitions beyond acting — such as writing, directing and producing.

He wore all three hats and stayed behind the camera for his directorial debut “Beside Still Waters,” which he co-wrote with Mohit Narang.

Lowell’s first feature played the festival circuit and has several distribution offers, but he still needed to raise money and finalize the deliverables, so he looked to Kickstarter for the funds. The goal was to raise $63,021, which was accomplished in a single day, and the campaign has continued on to overwhelming success.

In a wide-ranging interview with TheWrap‘s film reporter Jeff Sneider, who has known Lowell since his days at USC, the actor-turned-director gives credit to the “Veronica Mars” fanbase and his committed cast, while lamenting the possible fate of his Fox sitcom “Enlisted.” Lowell also reveals the title of his next project and discusses his collegiate history with “Saturday Night Live” star Beck Bennett.

What do you attribute that staggering success to?
I think there are so many factors. First and foremost, without tooting our own horn, we’ve been running a really strong campaign. We’ve got some great prizes and we’re making everyone feel like a part of the process. We spent a lot of time preparing for this thing. Also, this was my first film, so there have been a lot of supporters of mine over the years who really wanted to see this happen for me and show their support, which has been really gratifying. But yeah, above all things, the unbelievable power that has been the “Veronica Mars” support network has contributed greatly to the success of this campaign. Kristen [Bell], Ryan [Hansen] and Jason [Dohring] have all been amazing and Rob Thomas sent a personal email to all 91,000 backers supporting the project. I think it’s coming from a lot of different places, but mostly the “Veronica Mars” Kickstarter backers.

We’ve known each other a while and I’ve always known you to have varied interests than just acting, such as photography. Was directing a natural progression for those greater ambitions — and did you find you had an easier time because you’re an actor, in terms of luring talent and financing?
I’ve always been a mover and shaker but it’s funny, I feel like being an actor didn’t make much of a difference in the way people would normally think. For example, getting the movie financed, it didn’t matter that I’m an actor. The biggest challenge was that I’d never made a movie before and the question was whether I was capable of doing it. Being an actor doesn’t really influence that answer. It’s about having a vision.

What made you want to direct and think you could pull it off?
One of the reasons I wanted to direct is to talk to actors like I want a director to talk to me. And that proved to be especially important on set — communication. I’ve seen first-hand what tactics work with actors and what don’t, as well as what works for me. I’ve always been a sponge on set. I’ve been interested in the entire process of making a film, not just my small cog in the machine. Having an acting career prior to my directorial debut has been great because it was like a decade-long classroom.

Talk to me about the casting, because these kinds of movies are so dependent on chemistry.
Casting was probably the thing that my co-writer Mo [Mohit Narang] and I spent the most time really fine-tuning. I had Allison Estrin and Kerry Barden and Paul Schnee, who cast me in “The Help,” on this and I love their work and how comfortable they make me feel in a room. They loved the script so I knew I was in good hands in terms of casting. I’ve seen every reunion/friends-getting-together-for-a-weekend movie that exists. I’ve seen all of the good ones and more importantly, all of the bad ones. I watched them all because I wanted to identify what makes these projects work. I noticed that a lot of times, the ones that don’t work are when they try to stack the cast with as many big actors as they can afford, or they can convince to do it. For us, it was really important that the actors feel like they could be old friends. Every actor had to commit to auditions and table reads and chemistry reads because if they didn’t get along as spectacularly as they did, it would’ve fallen apart.

And one of those actors is Beck Bennett, who you went to USC with, and we all knew each other through John Dardenne, who I worked with at Blumhouse. Now he’s killing it on “Saturday Night Live” and the AT&T commercials, so you kinda lucked out, no?
I had to fight like a jungle cat to get Beck into this movie. He was my roommate my freshman year of college, and I’ve always known his unbelievable talent. I fought to get him into the film and the funny thing is, he’s skyrocketing. He went from 0-to-60 like that and I’m just so proud of him. It’s nice because this is a movie about friendship, and serendipitously, the cast and I all became friends and we’re still so close. Everyone has been down to support the Kickstarter campaign.

What is the purpose of the Kickstarter campaign? Post-production, P&A?
Our original goal was to cover the absolute bare minimum necessary to get our film to the finish line of its deliverables, meaning insurance, dubbing, closed captioning, etc. Literally, every dollar of it is going toward [proper] distribution of the film. Being able to hire a publicist and having a real premiere. Having the most theaters play it before it’s released digitally. Which is amazing, because we never dreamed we’d be able to have the kind of release that we can as a result of the campaign.

What’s also super empowering is there were a number of distributors that expressed initial interest in the film, but when it came to number crunching, there was a sense there wouldn’t be enough interest in the campaign. But every backer is a direct contradiction of that belief, and distributors have circled back because they’re intrigued by what’s happening on Kickstarter. It has opened all sorts of new doors for us. We’ll have to see where we end up. I mean, Kickstarter has to take its cut and Amazon Payments take their cut. We have to set aside money for prizes, which will be significant. So once the campaign is done and final numbers are in, we’ll be able to lock down our distribution deal. It’s very exciting for us right now.

What’s the deal with “Enlisted?” I apologize for having never seen it, but I hear it’s a really funny show and yet, it may get canceled.
The show is amazing. My love interest is one of the actresses from “Beside Still Waters” — Jessy Hodges. I think it’s sort of a classic case of a great show from a unique voice and a committed group of talented collaborators not being understood by a network. I’m really proud of the work all of us did on the show, but it’s not easy to garner any kind of numbers with such a rough time slot. We’re flattered by the overwhelming support from fans and just the general critical acclaim. You don’t often see publications putting their reputations on the line for a new show, let alone one that’s on Friday night at 9 p.m. Nothing’s official, but it’s just not a good sign that we haven’t been on the air the last two weeks. We still have four episodes left and I know the network is trying to find a place to air them. I know we’d all be bummed out to not be able to work together anymore.

What’s next for you? Are you writing anything?
Well, Mo and I recently finished our new script “Isolation/Tribes.” “Beside Still Waters” won the Narrative Feature Jury award at the Austin Film Festival and just before the Kickstarter campaign, they invited us back to do encore screenings and they let us put on a reading of “Isolation/Tribes.” So that’s our next project, which Mo and I hope to put into production later this year or early 2015. I’m eager to get started on number two.

Are you still going to be acting at all as you prep that project this year?
It’s a little bit of a tightrope walk to make sure I’m giving enough priority to what has become an equally important creative commitment in my life. But I’ve been auditioning. I remember thinking I may not act anymore because I was having so much fun directing. But then I realized I missed acting, and jumped back in full-force to satiate that appetite. Now I’m trying to find a balance between the two. But I’ll always act. It’s in my bones.

The Kickstarter campaign for “Beside Still Waters” closes on Wednesday, April 30 at 11:59 p.m.