Chris Matthews, who once served as a Capitol police officer, said he felt “violated” by the Jan. 6 attack on the Capitol by supporters of then-president Donald Trump. The former MSNBC host made his comments on Thursday’s “Morning Joe” while promoting his new book.

Pressed by “Morning Joe” co-host Willie Geist on his reaction to not only the deadly riot, but Republican lawmakers’ subsequent disinterest in investigating it, Matthews said, “That got to my heart. I felt violated.”

He called the Capitol a “cathedral of democracy” and pointed to major civil rights legislation that was passed within it to make his case. 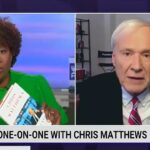 Also Read:
Chris Matthews Says His MSNBC Exit Was Because ‘I Did Something Wrong’ (Video)

“This is where the best of America has come together, a Congress coming together. It’s our democracy. I worked with a cop when I was a Capitol policeman who said, ‘I would die for this building,'” he said.

Matthews was welcomed on the air by Geist, who said his voice was “missed” on MSNBC during the riot and subsequent coverage, and co-hosts Joe Scarborough and Mika Brzezinski, who assured the former host it was “great to see” him.

Matthews has been making the rounds on MSNBC to promote “This Country: My Life in Politics and History.” Earlier this week, he sat down with Joy Reid, who replaced him in his 7 p.m. ET slot. During that chat, he admitted he left MSNBC in 2020 because he “did something wrong.”

Matthews’ exit happened rapidly just days before the start of the COVID-19 pandemic. On Feb. 28 2020, a journalist accused him of making inappropriate comments to her when she was a guest on his show. The accusation came just as Matthews was already enduring heavy criticism for making what many observers said were sexist remarks in a post-debate interview with Elizabeth Warren during the Democratic primary. On March 2, Matthews abruptly announced his retirement and apologized for his prior behavior.

His time slot was eventually filled by Reid’s “The Reid Out.” During Tuesday’s episode, Matthews and Reid briefly touched on those circumstances: “I know the reason I left. Somebody reported that I complimented somebody — actually, I’m going to use the right words here — I commented, remarked on somebody’s appearance in the makeup room, and I shouldn’t have done that. Nobody has to come defend me,” Matthews said.

“And by the way, I kept all my friends but nobody needs to defend me. I did something wrong,” he continued. “So I’m gonna move on from that. I accepted ownership of it. Using a nice modern phrase, I took complete ownership. I did not deny it. I lost my show over it so that’s it. That’s the truth.”