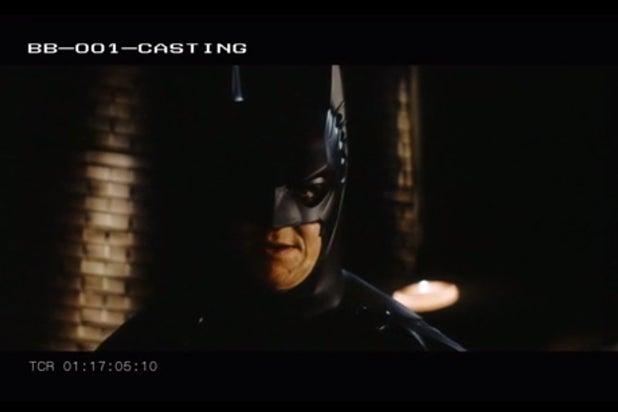 When Christian Bale auditioned for the role of Batman in Christopher Nolan‘s 2005 reboot, “Batman Begins,” he did it wearing Val Kilmer’s old batsuit, according to a new documentary about the films set to be released with “The Dark Knight Trilogy: The Ultimate Collector’s Edition” Blu-ray package on Tuesday.

In fact, all the actors who tested for Batman did so in Kilmer’s suit, from his one-time turn as Gotham’s billionaire hero in 1995’s “Batman Forever.” Apparently, George Clooney‘s nipple-tastic uniform from “Batman & Robin” was at the dry cleaners.

Batman News posted a clip from the 76-minute documentary that shows Bale acting opposite Amy Adams, who read for the role of “Rachel” that eventually went to Katie Holmes as a favor to the casting director.

Putting on Kilmer’s dusty old suit was necessary, Nolan said, since the audition was more about seeing which actor could “project massive energy through this costume” than it was acting ability. Bale, of course, nailed it.

Also read: Christian Bale Is an Unmasked Vigilante in ‘Out of the Furnace’ Trailer (Video)

Bale’s controversial “Batman voice” was present in his audition as well — and helped him win the role. “I think Christian’s voice was a big part of the impression he made in the test,” Nolan said. “He had decided that Batman needed to have a different voice to Bruce Wayne, that he needed to put on a voice.”

And yes, we get to see Bale utter what may have been his first on-camera line: “I’m Batman.”

The one thing we aren’t told: Whose suit Ben Affleck had to audition in.

Christian Bale auditions for Batman Begins in… by BatmanNewsCom