The veteran journalist started off by thanking colleagues like Bianna Golodryga for “holding down the fort” while she’d been away during the previous four weeks. 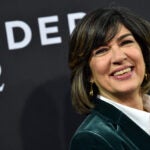 “During that time, like millions of women around the world, I’ve been diagnosed with ovarian cancer. I’ve had successful major surgery to remove it and I’m now undergoing several months of chemotherapy for the very best possible long-term prognosis and I’m confident,” the British anchor revealed. “I’m also fortunate to have health insurance through work and incredible doctors who are treating me in a country underpinned by, of course, the brilliant [United Kingdom National Health Service].”

Amanpour explained that she’s revealing her diagnosis for “transparency,” but also to encourage early diagnostic screenings for women around the world.

Watch Amanpour’s announcement above, via CNN.