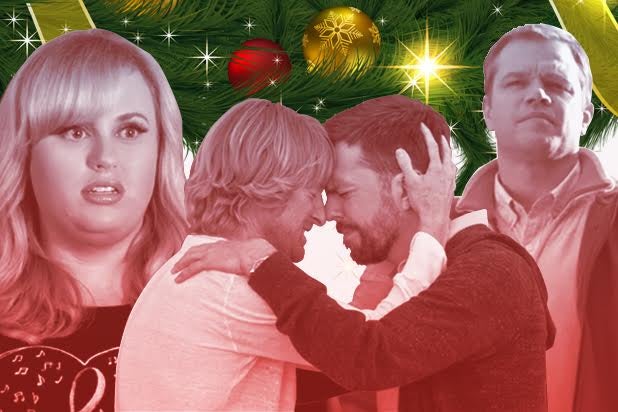 When it comes to this year’s Christmas weekend box office, there’s no question over which movie will be No. 1. “Star Wars: The Last Jedi” will continue its domination with a second weekend expected to exceed $100 million. But beneath “Star Wars” is a flurry of new releases that will try to give a solid showing at the box office in the face of the Lucasfilm juggernaut, with studios hoping the fresh batch of competition can have legs going into January.

Of these new films, the one expect to put forth the best showing is “Jumanji: Welcome to the Jungle,” which is being released on Wednesday and is projected for a $45 million six-day opening through Christmas Day on Monday from 3,700 locations. Made on a budget of $90 million, “Jumanji” will try to peel off some family audiences and the 18-35 demographic with its quartet of box office drawing stars: Dwayne Johnson, Kevin Hart, Jack Black and Karen Gillan. The film also has critics on its side, currently giving it an 83 percent rating on Rotten Tomatoes. For Johnson, this would get him back on his winning ways at the box office, as his last film, the critically panned “Baywatch,” only made $23 million over four days during its Memorial Day Weekend opening.

Directed by Jake Kasdan and based on the 1995 Robin Williams adventure film, “Jumanji: Welcome to the Jungle” follows four teens who wind up in detention and find a mysterious video game, which is actually the Jumanji board game from the first film transformed into a video game cartridge. When they play it, they get sucked inside the game and are transformed into their game avatars. With the help of another player who fell into the game 20 years ago (Nick Jonas), the quartet must find a way to escape. The film was written by Chris McKenna, Erik Sommers, Scott Rosenberg, and Jeff Pinkner.

Also expected to have a solid weekend is Universal’s “Pitch Perfect 3,” the final installment of Anna Kendrick’s female-driven musical comedy. Released on Friday, the threequel has differing projections from independent trackers, but average out to a $40 million four-day start from 3,400 screens. By comparison, “Pitch Perfect 2” posted a $69 million opening in 2015, though it was up against considerably easier competition in May with the R-Rated “Mad Max: Fury Road” and a third-week “Avengers: Age of Ultron.”

Directed by Trish Sie from a script by Kay Cannon, “Pitch Perfect 3” sees the entire cast from the previous two films reunite as the Bellas have one last performance together during a USO tour. Kendrick stars with a cast including  Rebel Wilson, Hailee Steinfeld, and Brittany Snow. The film has a 42 percent RT score.

The other Friday wide releases, Paramount’s “Downsizing” and Warner Bros./Alcon Entertainment’s “Father Figures,” don’t have as bright an outlook. “Father Figures,” a comedy from debuting director Lawrence Sher about a pair of brothers (Owen Wilson and Ed Helms) searching for their real father, is tracking for a $7 to $8 million four-day weekend. Glenn Close, J.K. Simmons, Christopher Walken, and Ving Rhames also star, with Justin Malen writing the script.

“Downsizing,” Alexander Payne’s sci-fi parable about a struggling middle class man (Matt Damon) who shrinks to miniature size to enter a new society, was met with mixed reviews when it debuted at the Venice Film Festival, scoring a 59 percent RT score. It’s looking at a four-day opening in the low teens against a budget of $69 million and will be released on 2,600 screens. Christoph Waltz, Hong Chau, and Kristen Wiig also star.

The biggest question mark is Fox/Chernin Entertainment’s “The Greatest Showman,” a musical starring Hugh Jackman as famed circus founder P.T. Barnum. The film is projected to make a six-day, $25 million opening from 3,100 screens against an $84 million budget, with Fox hoping that it will have the sort of legs that “La La Land” demonstrated last year when it opened wide to $9.2 million on Christmas weekend and went on to finish with $151 million. The film will also hope to drive younger female audiences to theaters with Jackman’s co-stars Zac Efron and Zendaya, who have a strong social media presence.

“The Greatest Showman” is directed by Michael Gracey from a script by Jenny Bicks and Bill Condon with songs written by “La La Land” lyricists Benj Pasek and Justin Paul. Rebecca Ferguson and Michelle Williams also star. The film has been nominated for three Golden Globes, including Best Musical or Comedy, Best Original Song, and Best Actor for Jackman.

In addition to these wide releases, Fox Searchlight’s “The Shape of Water” and Focus Features’ “Darkest Hour” will expand nationwide while other awards contenders like Fox’s “The Post,” Sony’s “All The Money In The World,” STX’s “Molly’s Game,” and Focus’ “The Phantom Thread” will also make their entrance. With all these films catering to different tastes this Christmas, their revenue, combined with “Star Wars,” is expected to push 2017’s domestic total past $11 billion for the third straight year, albeit short of the $11.3 billion made last year.