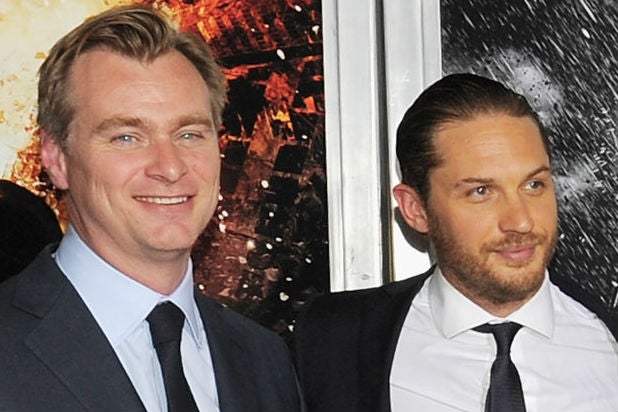 Nolan discussed his three-time hire, in films “The Dark Knight Rises,” “Inception” and the WWII epic “Dunkirk,” which Warner Bros. will open on Friday.

“He’d be amazing,” said Nolan of Hardy in the role last played by Daniel Craig. “He really would.”

Also Read: Tom Hardy, Why Must You Cover Your Beautiful Face?

The filmmaker was grilled over the prospect of inheriting the spy franchise from Sam Mendes by podcast host Josh Horowitz, on his show “Happy Sad Confused.”

Nolan has long been courted for the gig, saying he’s met with franchise producers Barbara Broccoli and Michael G. Wilson several times over the years.

“I’d love to work with them at some point … [but] I’d have to be needed,” Nolan said about possibly directing an adventure for the famed Brit. “I think they’ve got a really good thing going.”

Nolan did say he has a concept for Bond that hasn’t been done yet, but would not share details fear he would need the idea to get the job someday.

The podcast touched on Nolan’s present view of success in the industry, and his process on “Dunkirk,” which earned rave reviews and is expected to take the top spot at the box office this weekend.

Hardy is not currently available for Bond. He’s about the shoot Sony’s Marvel hero project “Venom.”