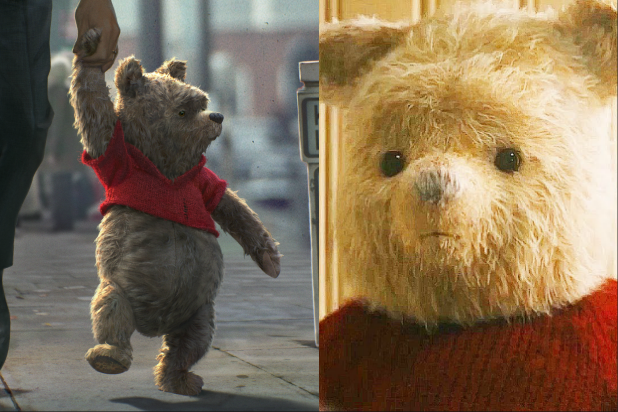 Michael Kutsche has done concept art for several Disney films, including Marvel titles like “Thor: Ragnarok.” But “Christopher Robin” gave him a special moment that no other project has: the moment when his design of Winnie The Pooh was presented to him as a real, stuff-and-fluff plush bear.

“Usually you just go from design to CG and see it in the final film,” he said. “But to actually see and feel the weight and the texture of the fur that I had in mind was so remarkable. Usually my job is so abstract and distant, but actually holding him felt like becoming a father in a weird way.”

Directed by “Finding Neverland” filmmaker Marc Forster, “Christopher Robin” sees Ewan McGregor as the weary, grownup who was once the childhood buddy of the denizens of the Hundred Acre Wood. Facing the possibility of having to layoff employees at his company while his relationship with his wife and daughter grow distant, good ol’ C.R. gets a visit from his old animal friends, who take a departure from more expressive playthings, as seen in films “Ted” and the “Toy Story” series, in favor of a magical realism approach that makes them look like weathered old toys.

Kutsche and Forster told TheWrap that the designs for Pooh and pals had two major inspirations. The first, of course, was the iconic drawings made by E.H. Shepard for A.A. Milne’s original 1926 book that introduced the world to Pooh.

“You’ll really see the Milne inspiration when you look at Rabbit,” Forster said. “In the books, most of the characters are stuffed animals. But Rabbit is a real animal in the Hundred Acre Wood, so we made him look more like a real rabbit similar to ‘The Jungle Book.'”

But the other design required some digging around the Disney archives, as Kutsche and the design team found old concept art of the characters from when the studio first acquired the rights to Pooh back in the early 1960s.

“From the older designs and animation tests, we figured out how we wanted Pooh and the other characters to move,” said Forster. “Pooh’s animation was very simple because he’s this very still character, but that’s actually harder than someone like Tigger who always bounces around because it’s actually difficult to animate ‘stillness’ and to express character through it.”

From there, Kutsche’s designs were used both as a guide for the CGI team and also to build Pooh, Tigger, Eeyore and Piglet as actual plush characters that McGregor and the cast could use as a reference point instead of just a green ball on a stick.

“We would do several takes of Ewan carrying Pooh through the streets of London,” Forster said. “We’d have some closer takes that the CG team would work on, and those would be grey stuffies that would be turned into Pooh digitally.”

“But in the wider scenes, Ewan’s carrying an actual stuffed bear on camera. We had over a dozen different sorts of bears we used for different shots through the movie. This movie is all about that relationship between Pooh and Christopher Robin, so we wanted to have him as he was going to look in the film on set for the actors to interact with.” 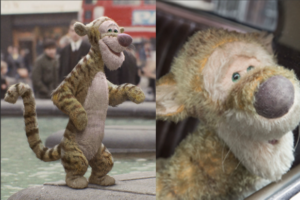 That meant coordinating between the practical and computer design teams to give the Hundred Acre Wood residents the look of toys that don’t exactly look fresh out of the store. But the wear and tear of each character isn’t the same. While Piglet’s large ears are frayed at the ends, for example, the exuberant, active Tigger looks a lot more dirty, befitting all the bouncing he’s done through dirt and grass during all that time he was apart from Christopher Robin.

To show all that wear, Forster worked with the design team on picking the right kind of fabric to match each character, from the smoother material for Kanga and Roo to the longer, more unkempt strands covering Pooh’s body.

“Every fur stand and every stitch of fabric for the clothes like Pooh’s sweater had to be recreated digitally, so that was a painstaking process.”

But it’s all worth it for Forster, who is glad that he finally is able to make a film that he can watch with his kids.

“The story is about Christopher Robin finding the time with his tough schedule to be there for his daughter, and that’s something I really identify with,” he said. “It started when I was on a plane with my daughter, who at the time was six. She was watching a cartoon of Winnie the Pooh on the iPad and she turns to me and basically says, ‘I can’t watch any of your movies. I’m too small. I can’t see what you’re doing and you’re always busy!'”

“So I look at the iPad and see Pooh and I tell her, ‘You know what, let’s make a movie out of that!'”

A Timeline of Disney's Animated Animal Sidekicks, From Mushu to Sven (Photos)

"Mulan" celebrates its 20th birthday on June 19, having come out on that day in 1998. The beloved Disney film is based on a Chinese legend and tells the story of a young girl, Mulan, who impersonates a man to take her sick father's place in the fight against an invading Hun army. The movie was well-received by critics, earning multiple Golden Globe and Academy Award nominations, and grossed $304 million at the box office. In addition to the title heroine, "Mulan" starred Eddie Murphie as a small red dragon named Mushu, who serves as a guardian for Mulan throughout the movie. In honor of Mulan's 20th birthday, take a look back at some of Disney's most iconic animal sidekicks.