MSNBC’s Chuck Todd is once again irking Democrats by his lack of hugs for those leaning left, with Friday’s beef about his questioning if the nomination of Ketanji Brown Jackson to the Supreme Court is the party’s last hurrah before the November midterm elections — leaving many to suggest outgoing White House press secretary Jen Psaki replace him.

Although Friday was supposed to be a day of celebration for Dems because of KBJ’s historic nomination as the first Black woman appointed to serve on the Supreme Court, Todd took the glass-is-half-full approach on “MTP Daily.” 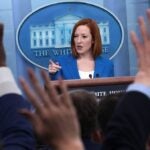 Those on social media were not happy with his pessimism about the momentous event and, to put it simply, are tired of his vibe.

“I really try not to join the pile-on with Chuck Todd but WTF??? ‘This might be the last victory for this White House,'” national affairs correspondent for The Nation, Joan Walsh, tweeted. 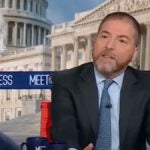 Also Read:
Chuck Todd Gets Set Straight When He Says Ukraine Is as Frustrated With U.S. as It Is With Russia (Video)

And Walsh was not traveling alone on the “WTF? Train.”

Also Read:
Chuck Todd Gets Set Straight When He Says Ukraine Is as Frustrated With U.S. as It Is With Russia (Video)

One Twitter user even called him a “conservative stooge” while others have suggested replacements… with outgoing White House Press Secretary Jen Psaki people’s No. 1 choice for his replacement. Psaki announced earlier this month that she will leave her post at the White House, with reports out that she is in talks to join MSNBC in May. According to Axios, she is in exclusive talks with MSNBC.