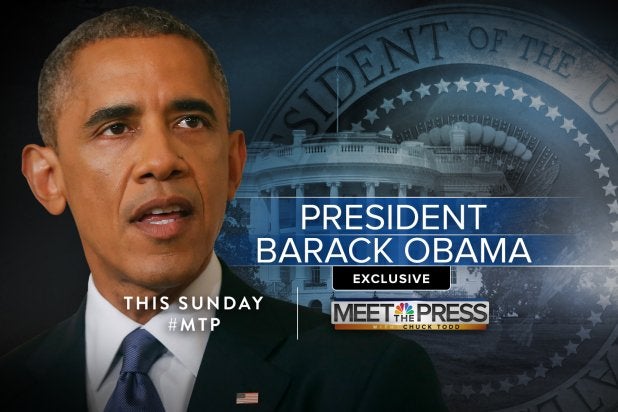 Chuck Todd kicks off his tenure as moderator of NBC’s “Meet the Press” this Sunday by sitting down for a wide-ranging interview with President Barack Obama.

Todd visits the White House to discuss a variety of topics including the ISIS threat, the Ebola outbreak, U.S. relations with Russia and Ukraine, and the midterm elections.

Also read: Chuck Todd to Take Over ‘Meet the Press’ in September

After NBC News chief foreign affairs correspondent Andrea Mitchell filled in for the past two weekends, Todd will officially take over the NBC News show from the outgoing David Gregory, who served as moderator for six years.

Todd remains NBC News political director, even as he steps into this new role. However, he is stepping down as host of MSNBC’s “The Daily Rundown,” and as chief White House correspondent.

Ironically, though, he’s almost immediately returning to the White House in his new role. Todd’s full extended interview with President Obama will air as part of his debut episode of “Meet the Press” this Sunday, Sept. 7 on NBC.