“Chucky” franchise star Jennifer Tilly said 2019’s “Child’s Play” movie — which Don Mancini, who wrote all seven “Chucky” films and directed three, had no part in — definitely “threw a crimp” in plans for the long-gestating “Chucky” TV series, which is now finally set to debut.

“Well, this franchise was already in the works long before the remake,” Tilly, who plays Tiffany Valentine, told reporters during a virtual panel for Syfy and USA Network’s “Chucky” show Monday at the Television Critics Association’s press tour.

Tilly says the “Chucky” television series was also “already in the works” before 2019’s “Child’s Play,” “so it did throw a crimp in things a little bit, because we were like, ‘Well now where do we belong in the ‘Chucky’ universe?’ And apparently the film was very good and very well-reviewed.”

She continued: “But the fans, I don’t know. Remember they came out with New Coke and everyone liked Coke Classic better, so they brought back the old Coke and now they call it Coke Classic? I think this is a similar thing. People loved the original ‘Chucky,’ with the voice of Brad Dourif. I’m sure you have something to say, Brad, because they actually called Brad, I think, and asked him if he wanted to do Chucky for the remake and he said no, I stand with Don.” 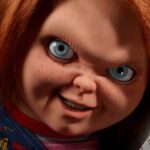 “That never happened! Another great story, Jennifer! … But I would have, Don’s the greatest,” Dourif, who was also sitting on the panel, said with a laugh to his co-star.

“Child’s Play” was directed by Lars Klevberg and written by Tyler Burton Smith. The 2019 film starred Aubrey Plaza, Gabriel Bateman, Brian Tyree Henry and Mark Hamill as the voice of Chucky, rather than Dourif, the longtime voice of Chucky.

The “Chucky” TV series, which has long been in the works and was ordered more than a year ago by Syfy, will finally premiere Oct. 12 at 10 p.m. on both Syfy and USA Network. 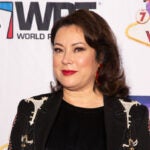 In the new series, a vintage Chucky doll turns up at a suburban yard sale and throws an idyllic American town into chaos as a series of horrifying murders begin to expose the town’s hypocrisies and secrets. Meanwhile, the arrival of enemies — and allies — from Chucky’s past threatens to expose the truth behind the killings, as well as the demon doll’s untold origins as a seemingly ordinary child who somehow became this notorious monster.

Tilly is reprising her role as Tiffany Valentine and Dourif is again voicing the doll. Dourif started with Chucky in the first film, while Tilly joined the franchise in 1998’s “Bride of Chucky.” 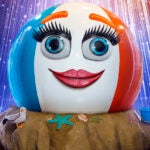 Also Read:
‘Masked Singer’ Season 6: Here Are All the Costumes Revealed – So Far

Mancini will serve as showrunner and direct the first episode of the show. David Kirschner, who produced all the films alongside Mancini, will executive produce alongside Nick Antosca and Harley Peyton, under Antosca’s Eat the Cat production company. UCP is the studio.

During Monday’s panel, Mancini said both Syfy and USA Network assured him there would be “no compromise” for the TV series when it comes to the gore and F-bombs the “Chucky” film franchise is known for.

“It was important to me that we be able to retain all the aspects of the franchise that the fans love, one of which is the gore, the other of which, of course, is Chucky’s propensity for dropping F-bombs,” Mancini said. “The networks, Syfy and USA, when we pitched the project, assured us that there would be no compromise in these departments. When I worked on both ‘Hannibal’ and ‘Channel Zero,’ which are both also under the NBCUniversal umbrella, I was shocked and kind of encouraged and excited to see how the boundaries could get pushed. So there will be no compromise with that regard.”