“Marwencol,” which won the top documentary prize at the South by Southwest Film Festival in February, has been acquired for distribution by the Cinema Guild, and will be released theatrically in the fall.

The Cinema Guild, a New York-based company that handles theatrical and video distribution and specializes in documentary, foreign and independent film, announced the acquisition on Wednesday. 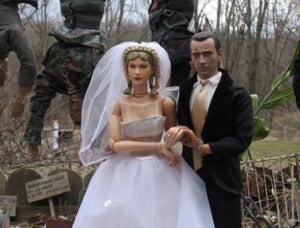 The film, from first-time director Jeff Malmberg, details the elaborate fantasy world created by Mark Hogancamp, a New Yorker who was brutally beaten outside a bar 10 years ago. Suffering from brain damage and unable to afford traditional therapy, Hogancamp constructed an elaborate, 1/6 scale, World War II-era town in his back yard; he named the town Marwencol, and populated it with Barbie dolls, each with its own detailed history and storyline.

In addition to the Grand Jury Award at SXSW, the film also won prizes at the Independent Film Festival of Boston and the Cleveland International Film Festival.

Writing on the Sound on Sight website after the SXSW screening, Emmet Duff commented, “It’s impossible to say whether Marwencol will get any sort of release, but if you can see this one, it will definitely leave an impression.”

In the release announcing the acquisition, Cinema Guild’s Ryan Krivoshey said the film is “like nothing you’ve ever seen. It not only captures the awakening of a bona fide artist, it brings to life a fictional universe with enough action, intrigue and romance to rival anything coming out of Hollywood this summer.”

Other recent films from the Cinema Guild are the documentaries “Garbage Dreams,” “The Beaches of Agnes,” “Sweetgrass” and “Sweet Crude.” The first two made the shortlist for the 2009 Academy Awards, but did not receive nominations.