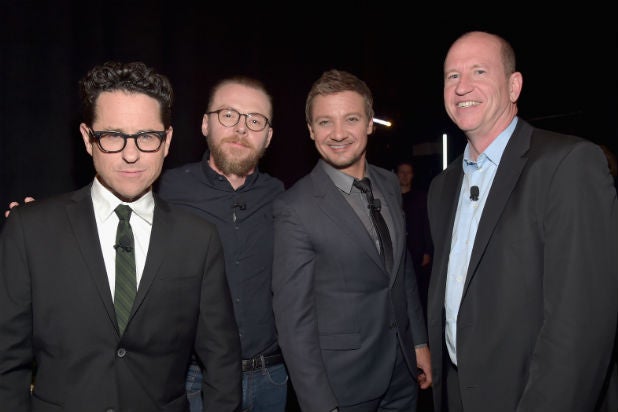 A bone-crushing “Ben-Hur,” chest-bumping “Baywatch” and a pre-taped Tom Cruise were among the highlights from Paramount Pictures’ presentation at the opening on Monday of CinemaCon 2016, the annual gathering of movie exhibitors.

But the presentation was pale in comparison to last year’s showy footage of “Mission Impossible: Rogue Nation” with Tom Cruise telling tales of his death-defying airplane stunt, and the studio having few movies to show off for this year. Instead this year the stars sent taped messages of appreciation to the exhibitors that show their movies, promising to see them next year.

First up was Fox and Arnett to deliver pizza (yes, really) through a meaty sizzle reel for “Teenage Mutant Ninja Turtles: Out of the Shadows.”

Footage from the June 3 release showed an “Avengers”-esque alien dilemma, a super-confident Fox and cheeky Arnett plus the first glimpse at Stephen Amell as Casey Jones.

But it took the booming voice of Morgan Freeman (pre-recorded) introducing actor Jack Huston — star of Paramount and MGM’s “Ben-Hur” remake — to get the majority of The Colosseum theater to sit up straight.

Huston, who has taken on the role originated by Charlton Heston in the 1959 classic, told exhibitors he was delighted that “for the first time in 3D, we will tell this story to a new generation.”

Diesel said the group was instrumental in the massive financial success of Universal’s “Fast and Furious” franchise, “and that’s not something I take lightly,” he  said.

Cruise said he and “Mission Impossible: Rogue Nation” director Christopher McQuarrie are prepping another sequel to shoot in the fall, before introducing the first look at the “Reacher” follow up — a gratifying shoot ‘em up with an icy Cruise in character.

Next, Moore brought out Adams and Renner to showcase their alien mystery (and oddly titled) “Story of Your Life” by director Denis Villeneuve (“Prisoners,” “Sicario”). Renner, who was joined on stage by Adams, described her as the “strong badass female” lead of the film. Most presumed the film was a love story until aliens appeared on the screen.

Adams plays language expert Dr. Louise Banks, tasked with decoding the speech of Earth’s first extraterrestrial visitors. The trouble is, they may be mixing up the meaning of tools vs. weapons. Also with Forest Whitaker and Michael Stuhlbarg, moviegoers find out whether Banks can thwart widespread warring when “Story” comes out sometime next year.

The presentation wound down with Simon Pegg presenting his colleague J.J. Abrams with CinemaCon’s “Showman of the Year” award.  The “Star Wars: The Force Awakens” director took a moment to address the hot topic at the convention — Sean Parker’s The Screening Room.

“Much has been said of other technologies that threaten the theater experience — and of course I am no expert, and I’m open to all points of view and good ideas to keep theaters thriving — but we need to do everything we can in this age of piracy digital technology and disruption to be thoughtful partners in the evolution of this medium.,” he said.

“We have to adapt. it’s going to be required of all of us. we need to meet that challenge with excitement and create solutions and not fear. But in my view it’s simple: There is nothing better than going to the movies and there never will be. “

Moore dropped a surprise before sending the thirsty crowd to the Paramount after-party  — a super-cut from Dwayne Johnson and Zac Efron‘s “Baywatch.”

Thanks to paparazzi capturing every ripped stomach and ample bikini from set, the clip package was an expected visual feast that featured surprisingly strong language and a massive bro-off between Johnson and Efron. The men stage a conversation between their testicles, argue of cheat day donuts. Even the girls, lead by a seriously vamped up Alexandra Daddario, joke about their bikinis “riding up” uncomfortable places.

On location in Georgia, the entire cast promised exhibitors they would be present for CinemaCon 2017.