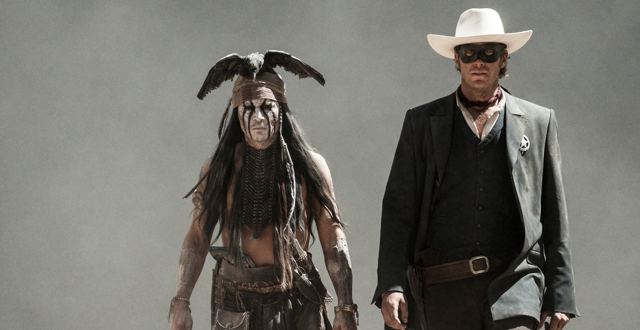 Walt Disney Studios screened an action-heavy sneak peek of “The Lone Ranger” at CinemaCon that seemed to grow on theater owners as more and more scenes of cowboy and Indian mayhem unfolded.

At its conclusion, they gave the presentation loud and sustained applause. Their response should quiet some fears about the $215 million production, which has been buffeted by reports of budget overruns and production delays.

The movie is perhaps the biggest question mark of the summer box office. It's difficult to tell if Johnny Depp's star power will be bright enough to outshine a summer overflowing with big-budget sequels.

The footage, featuring a massive train heist and collision, makes clear that Depp's take on the masked avenger's sidekick Tonto will be another installment in his ongoing collection of eccentrics — a list that already encompasses a murderous barber, a mincing pirate and a demented chocolatier.

The movie, which reunites the "Pirates of the Caribbean" team of Depp, director Gore Verbinski and producer Jerry Bruckheimer, revolves around a character that first appeared on the radio some eight decades ago. It will be competing against better known superheroes such as Iron Man and Superman.

To help whet theater owners appetites, Disney trotted out Verbinski, Bruckheimer, Depp and co-star Armie Hammer, to no discernable effect. The four-some stood awkwardly on stage for a few minutes, with Depp mumbling one of his typically impenetrable quips.

"Armie is very tall…which means that none of us are short," Depp said of his 6 foot, 5 inch colleague. With that, the cowboy hat-wearing megastar exited stage right to let the footage speak for itself.

The footage was jokey, with lots of explosions and a healthy use of CGI — a formula that generated over $3.7 billion at the worldwide box office for the "Pirates of the Caribbean" franchise.

Should it fail, Disney can content itself that Captain Jack Sparrow's return is on the horizon. Walt Disney Studios Chairman Alan Horn told theater owners that a fifth "Pirates of the Caribbean" film will sail into theaters in the summer of 2015.